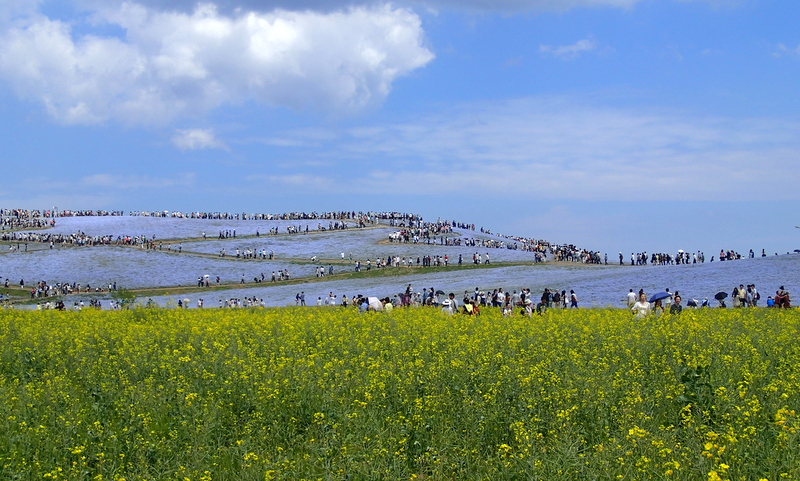 Last autumn I went to Hitachi Seaside Park in Ibaraki to check out the bright red kochia shrubs. I’d never seen anything like it! The shrubs were a stunning colour and made for a brilliant contrast to the blue sky. It looked just like a painting. 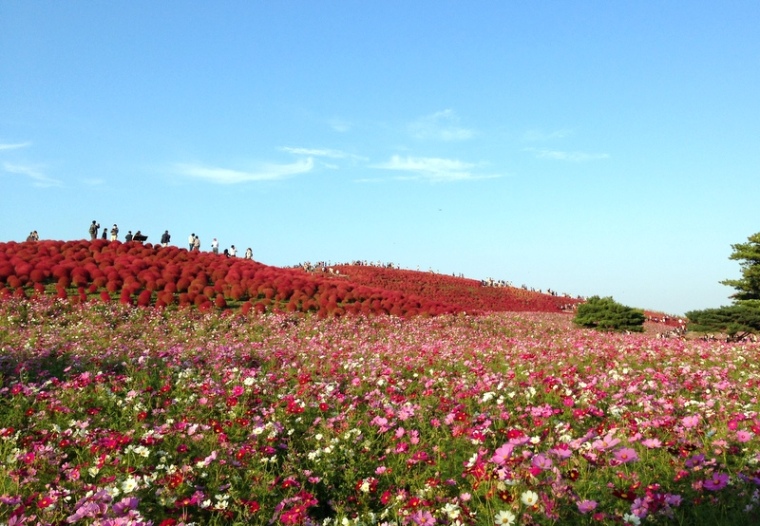 Same view, different season. Which do you find more impressive? 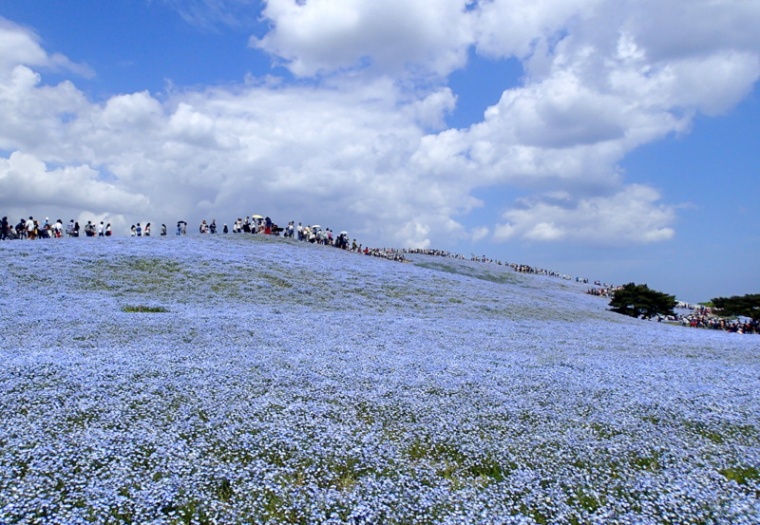 But ever since then, all I’ve been hearing about is the blanket of baby blue flowers that covers the same hills during spring. I guess the nemophila are much more well-known than the kochia. I knew I had to go see it for myself!

So, on Greenery Day (a public holiday in Japan), a friend and I headed north to Ibaraki prefecture. I was up early and out the door at 8am. 3 trains and 1 bus later, we finally got to our destination at about 11am. The trains and bus were all packed and we had to stand almost the entire way. It’s not uncommon to be forced to stand or sit at the ends of the cars in express trains or the shinkansen if you can’t get a seat. The JR Limited Express Hitachi from Ueno Station runs non-stop for 1 1/4 hours, flying past 9 stations, so at least we didn’t have to worry about moving over for people getting on or off!

Standing at the entrance to the park, my jaw instantly dropped and my eyes bulged. It wasn’t the beautiful flowers that shocked me, but the throngs of people! I know it was a national holiday, but I couldn’t believe what we were seeing. Literally thousands of people crowded the footpaths, open grass areas and food trucks! It was like seeing an army of ants crawling over the hills! On the same day (May 4th) in 2014, the park apparently had a record 71,000 visitors. At least people in Japan are courteous – you’ll never see anyone pushing their way through a crowd or jumping the queue.

We made our way around the huge park, getting a little lost along the way but enjoying ourselves regardless! It was a very warm day but thankfully the intense sun kept ducking behind the clouds to give us some relief. Kids were playing in the massive outdoor adventure course, teenagers were doing jumps around the BMX track, families were cooking lunch in the BBQ area, pet dogs were enjoying the open space. The park was buzzing with activity.

We eventually came to the famous sea of blue!

The pale blue flowers reached up to the blue sky. Behind us, the sky was met by the deep blue ocean. Mother Nature was really turning on her best. We joined the masses and followed the zig zag path up and around Miharashi Hill. The petals are tiny and their stems are so short, but when combined with 4.5 million others, nemophila are an attention-grabbing force! Every time the sea breeze swept over the hill, the flowers would suddenly come to life, whirling round and round.

Hitachi Seaside Park is a bit of a mission to get to – let’s face it, it’s kind of in the middle of nowhere – but it’s well worth the effort! Spring is definitely most popular season here among the Japanese, but I think the Kochia (in October) and Nemophila are both something you have to see at least once in your life! 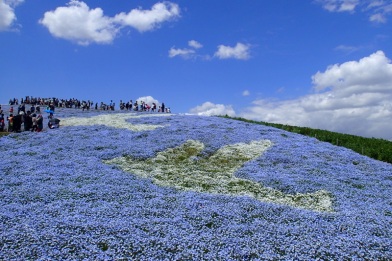 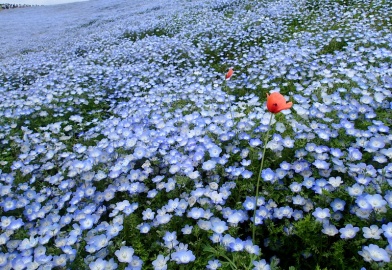 A pop of colour 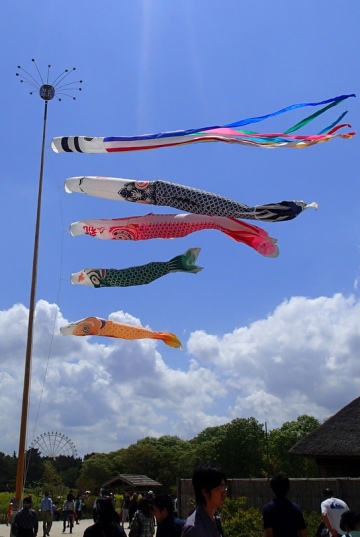 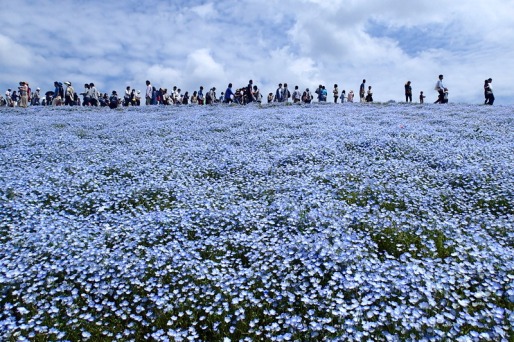 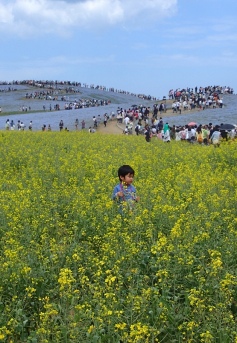 Lost in a field of “nanohana” 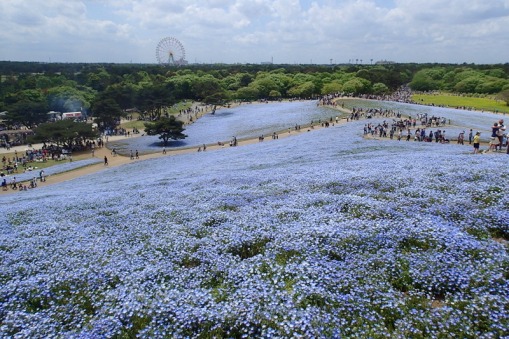 Ferris wheel in the distance 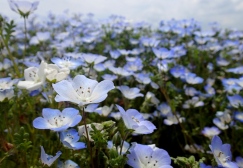 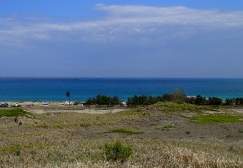 The actual ‘sea of blue’! 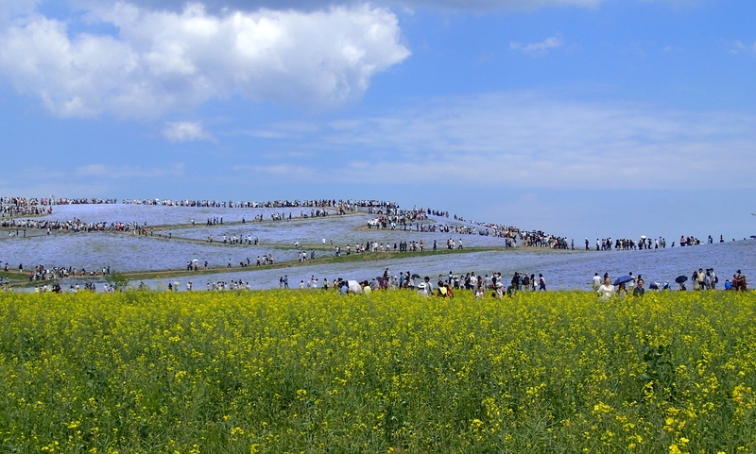 29 thoughts on “A Sea of Blue in Hitachi”