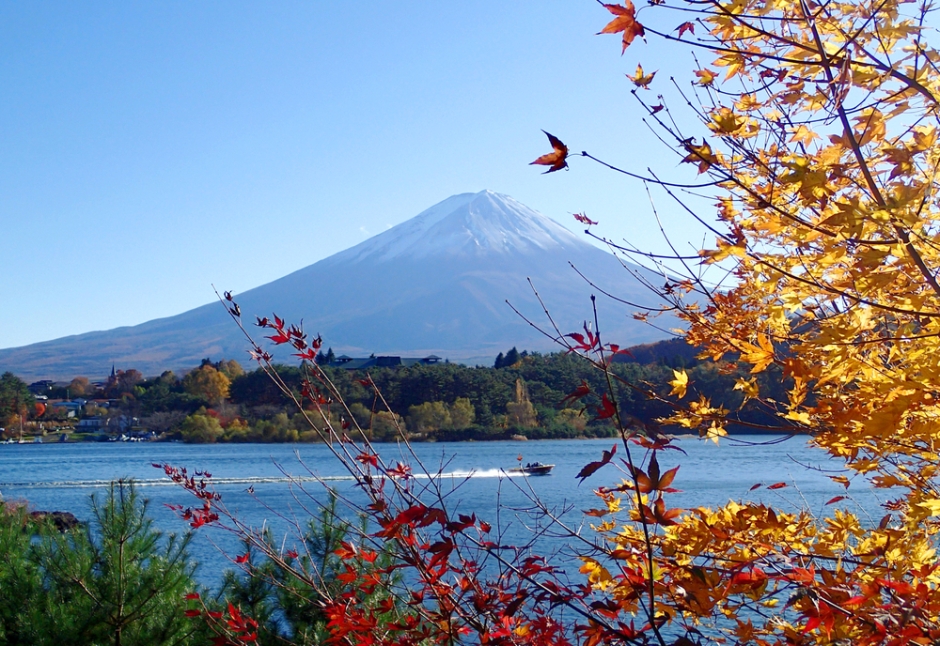 Stepping out of summer and into autumn is one of the most exciting times of the year!

It’s inspiring to be outdoors surrounded by vibrant splashes of colour as the momiji turn from green into the most surreal shades of yellow, orange and red. I am constantly in awe of Mother Nature and the things she’s capable of.

In Japan, the leaves change colours in September in the colder regions. The red wave slowly washes over the country blending with winter, till it disappears mid December. We get quite a decent amount of time to experience this change of seasons – you just have to be willing to travel around the country.

During October and November, I went on a few trips out of Tokyo with some fellow nature and photography enthusiasts. We tackled muddy forests, juggled umbrellas and cameras, were met with a bit too much fog than we wanted… the weather wasn’t always on our side, but it’s hard to complain when you have a front row seat to such an amazing natural phenomenon. Thankfully, the sun did pop out on a few occasions!

There are many places to choose from to catch the changing foliage, but here are three of my favourites near Tokyo – one to the north, one to the west and one to the south. They can all be done as a (rather long) day trip, but I would definitely recommend staying overnight if possible just so you don’t have to rush and you can enjoy the place without the day-tripping crowds.

This was my second time to visit Oku-Nikko, the region beyond the World Heritage shrines and temples of Nikko. Last time, the entire place was covered head to toe in lush, green foliage. It was a gorgeous place to be in the middle of summer, and turned out to be just as beautiful in autumn. I was particularly looking forward to seeing Ryuzu Falls, one of the most famous autumn leaves spots in Japan. 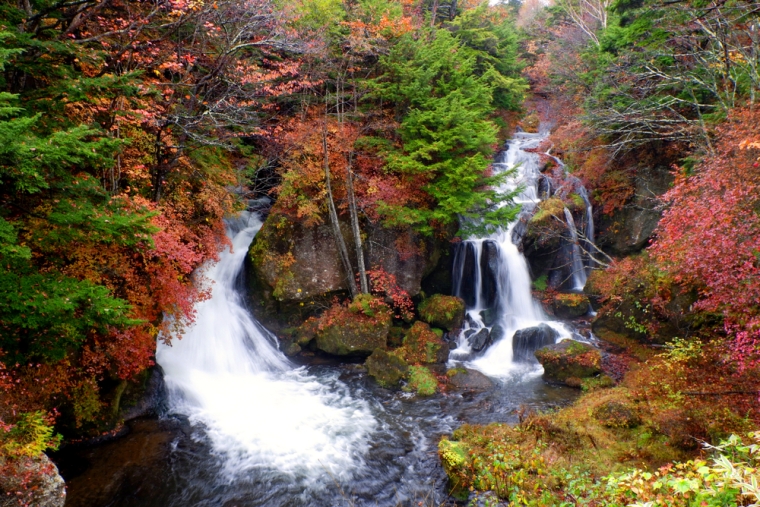 A few days before the trip, we found out that a typhoon was on its way. Most typhoons blast the country in August and September, so it was unusual to have such intense weather in October. Needless to say, it was a very wet weekend spent entirely in my rain boots. On the bright side, I think the rain deterred a lot of people and the roads weren’t as packed as I’d feared.

It was also my first time to stay in the Oku-Nikko region. There aren’t that many hotels to choose from, but I managed to get the last room available that looked out over Lake Chuzenji. Being able to wake up to a view like this was one of the best parts of the trip.

A weekend in Oku-Nikko was a great start to the momiji-hunting season! 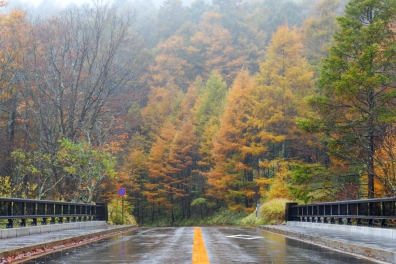 In Japan, there’s a word to describe someone who brings the rain: ame-otoko for men and ame-onna for women. Whenever it rains during an event, we jokingly say “It must be because so-and-so is here.”

I couldn’t believe it when I checked the weather forecast and saw yet another typhoon was on its way. This was actually the third time this year a typhoon hit on a weekend I had a trip planned. I guess I have to accept that maybe I am something much worse than an ame-onna… I’m a typhoon-onna! 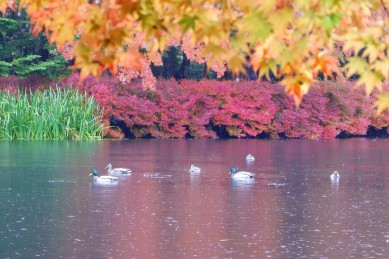 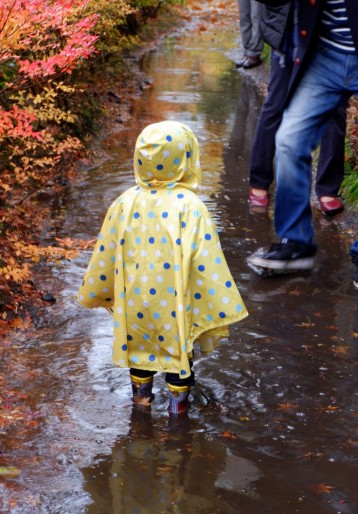 This was my third time to visit to Karuizawa; my second time in autumn. I’m still obsessed with it so much! It’s such a charming town with surprisingly a lot to do – exploring historical sites, nature trails, envying holiday houses, eating at restaurants and cafes, outlet shopping, skiing, and lots more. It would be a dream to rent out one of the gorgeous houses in the summer — I’ll be dreaming for a while I think.

One of the coolest places we visited was an old, discontinued train line outside of Karuizawa that goes to Yokokawa in Gunma. The most popular section of the line is a bridge called Megane Bashi made of four towering brick arches. At 30m high, it’s the biggest arch bridge in Japan. It is quite the sight to come across deep in the mountains, and looks like something you’d find in England rather than Japan!

The railway follows the old Nakasendo highway that linked Edo with Kyoto. This road started out as a mere path in the 8th century, and became one of five national highways in the Edo Period. I didn’t even realize it at the time, but I’ve visited other sections of this 534km highway, like the preserved post towns of Magome and Tsumago. It’s so cool to discover connections between different places like that. I feel like I’m just walking my way through a history book! 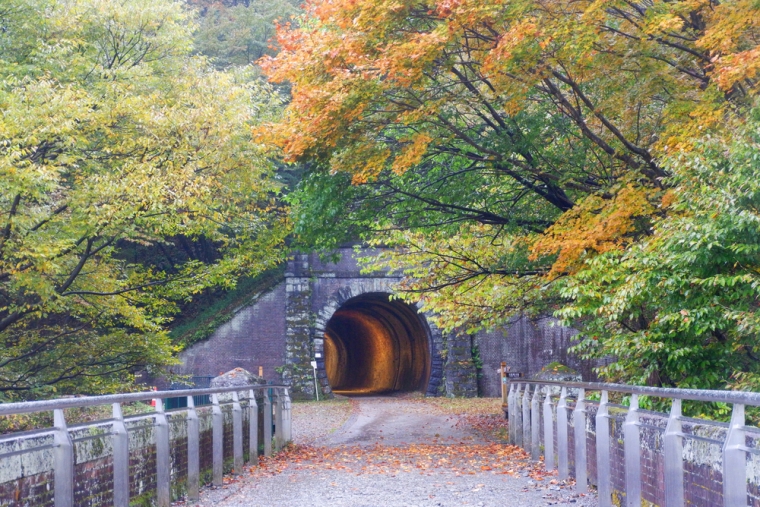 I’d had my fingers crossed the tightest for good weather at Kawaguchiko. Not only did the sun come out, but just a couple of days before we went, Mt Fuji was crowned with her permanent white cap for the season. Hooray! 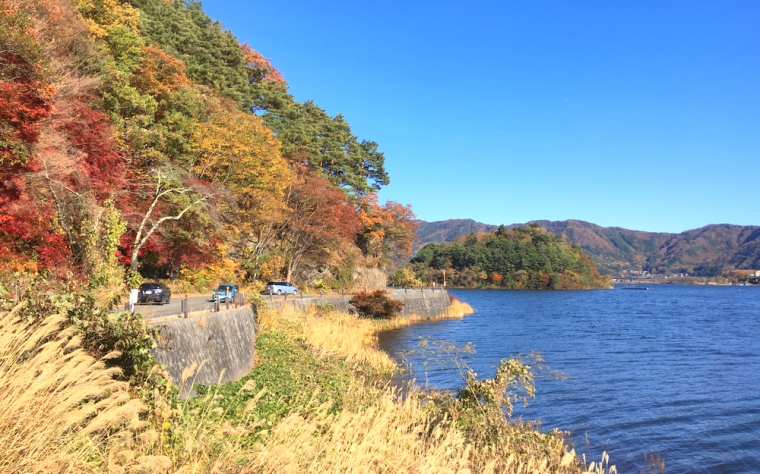 My heart was full of joy seeing the red momiji framing a snow-capped Fujisan and blue sky. We visited the Momiji Tunnel on the west side of the lake, and the Momiji Corridor on the north shore.

The “corridor” has a small festival with food stalls and the trees are lit up at night, so the majority of visitors go there. But, continuing further to the “tunnel”, we had some parts entirely to ourselves. It was fun trying to find that perfect momiji-Fuji view, and I think it’s safe to say we did!

After this trip to Kawaguchiko, the autumn leaves arrived in Tokyo. Riding my bike to and from work down golden, ginkgo-lined streets and past little shrines filled with bright red momiji has made me smile every day.  And now, it’s time to step out of autumn and into winter!