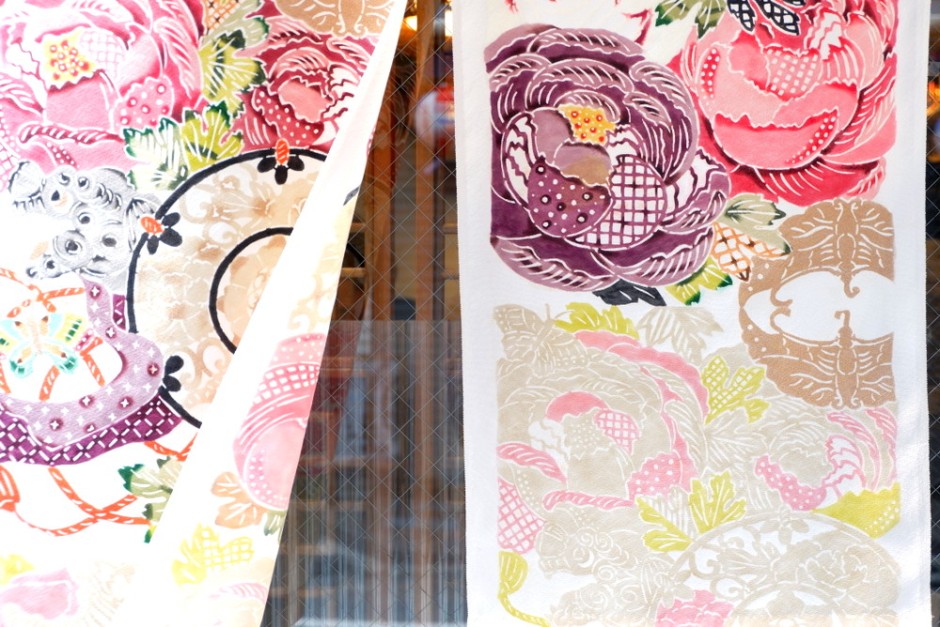 Despite being just a short 10-minute train ride north from Shinjuku, the area of Nakai and Ochiai couldn’t be more opposite to Tokyo’s red light district. While Shinjuku Station—the busiest station in the world—is surrounded by towering neon lights, packed bars and 24-hour entertainment, the northern part of Shinjuku Ward is desperately trying to hang onto its roots.

In the late 19th century, Ochiai was a mere village that two rivers ran through. The village slowly grew into a town, and became a built-up area where many residents had small vegetable farms. The Kanda and Myoshoji Rivers were narrow and shallow, making them the perfect place to set up workshops for a particular type of art: dyeing.

Traditional fabric dyeing stretches as far back in Japan’s history as its traditional dress, the kimono. Artisans would dye and hand-paint long pieces of silk and cotton, then wash them in rivers till the colour stopped running. They would then be hung out to dry before being cut and stitched into kimonos. At the height of the industry, there were over 300 workshops in Ochiai that were in charge of the various complex and elaborate processes of kimono-making.

In WWII, Ochiai was one of the areas flattened during air raids. Ochiai was replaced with Shinjuku Ward in 1947 and at the same time came the rapid modernization of Tokyo. The traditional dyeing industry never fully recovered.

Now, very few people know of Nakai and Ochiai’s history. In fact, I hadn’t even heard of Nakai Station before this year, even though I’ve lived in Tokyo for 5 years. If you visit the area on any given day, it would seem just like any other quiet, residential area.

Luckily, there are people who care; people who don’t want traditions to fade away. A committee was formed some years ago to help keep the art of dyeing alive (I’m glad I’m typing that and not saying it aloud!). They gather dyeing specialists, university art students and local school kids to take part in a special annual event called Some no Komichi.

Every February, the Myoshoji River and area around Nakai Station thrive once again as the townspeople recreate how it once would have looked. For the 3-day event, the river is transformed into a “River Gallery” full of colourful cloth floating above the water. The streets become a “Street Gallery” with Japanese curtains called noren hung up out the front of shops and houses.

Thanks to the Some no Komichi event, Nakai and Ochiai are regaining their status as the dyeing region of Tokyo. Through workshops and displays, the dyeing techniques are being passed onto younger generations, and who knows, it could even lead to the revitalization of Tokyo’s dyeing industry! In any case, it’s a great event to enjoy the culture and history of the area.

A 300m section of the Myoshoji River becomes a fascinating window into the past. 10m, rectangular pieces of dyed fabric are strung above the water, reflecting what the scene would have looked liked in the Showa Period, as the workers washed and dried the fabric. When the sun is shining, the colourful designs are cleverly mirrored in the river below, letting us see both the upper and lower sides of the fabric.

The patterns and designs vary on every piece of fabric. One section is made by local elementary and kindergarten school students. The rainbows, suns, flowers, stick-figure people are the typical pictures you see kids paint, and you can’t help but smile at their innocence. So fun and playful!

Another section is made by university art students, who this year created bright-coloured tie dyed patterns. And the middle section is made by professionals. You can see traditional Edo-style prints and elegant patterns commonly seen on kimonos.

The River Gallery is viewable over the 3 days of the festival from 10am to 5pm. 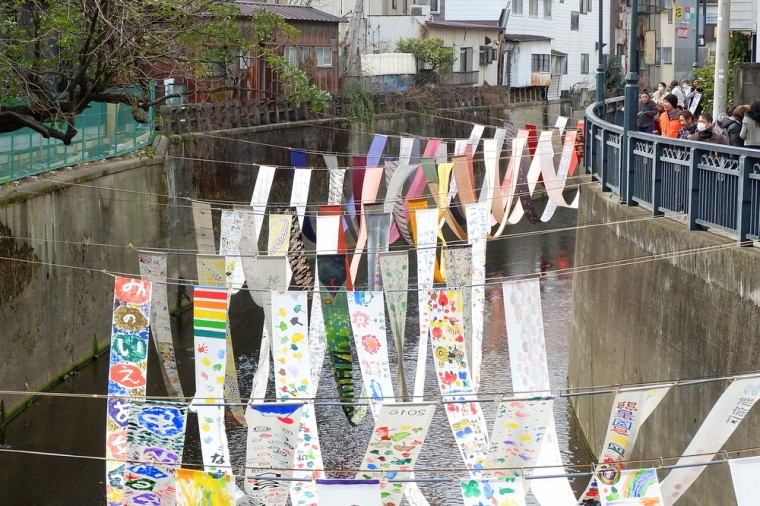 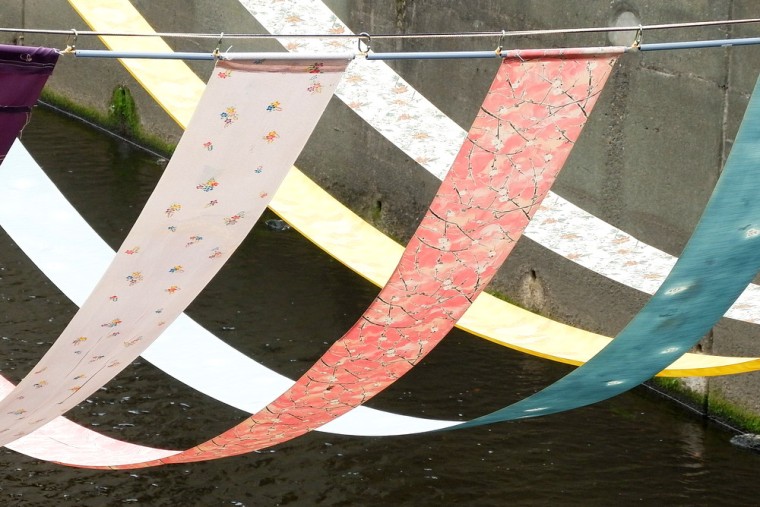 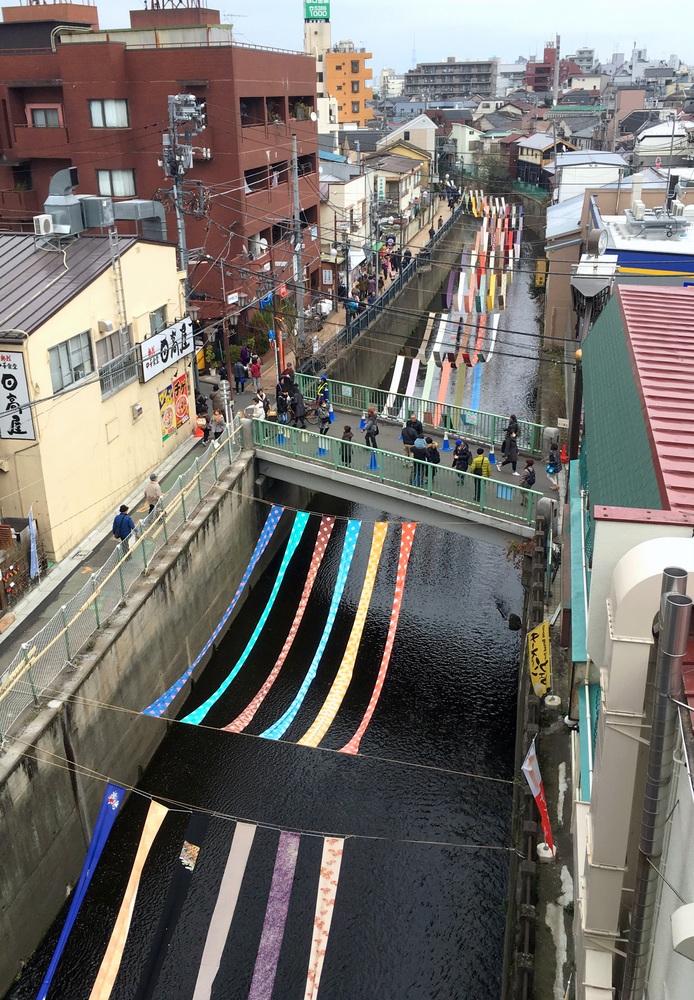 Noren are a traditional curtain that serve to divide rooms inside or mark entrances outside. At this year’s Some no Komichi, there were 107 norens on display. I loved the bright colours and patterns which ranged from traditional, familiar scenes to abstract, unique designs. They are displayed all throughout the town, and you can either track them down through the official event map, or just wander through the streets, discovering them along the way – which is way more fun in my opinion!

It was so interesting to examine the norens up close and learn about the different techniques. Some patterns are made with hand-cut paper stencils, some are painted free hand, some are tie-dyed, and some even used natural colours from plants! 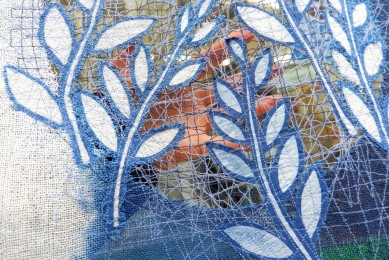 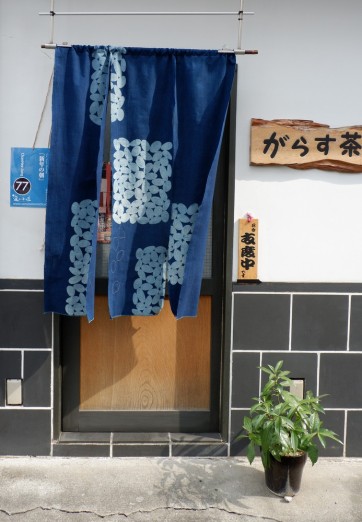 For the festival, Nakai and Ochiai really do turn back into a kimono town. There are loads of men and women, both Japanese and visitors, who are dressed in kimono.

You can try different classes and experience fabric dyeing yourself. There are many little stalls on the side of the street selling beautifully handmade goods. I picked up a tiny kimono frame you can see below. I was planning on giving it to someone as a gift but it’s so cute I might just keep it for myself as a great memory of this festival.

Another cool experience I had was meeting an elderly man who owns one of the original workshops. His business is pressing and cutting the fabric for kimono, which is what he’s been doing for the past 50 YEARS! The machine looked as old as the man, but somehow it still worked. He proudly showed me around his workroom, and I was blown away by the detail on some of the hand-painted kimono. 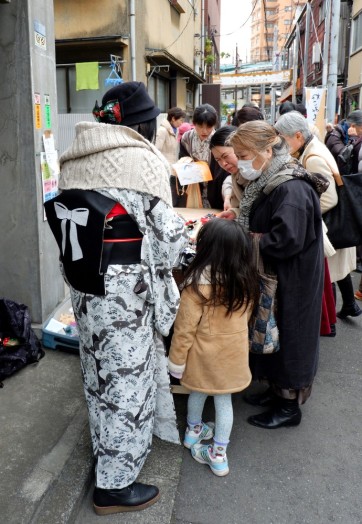 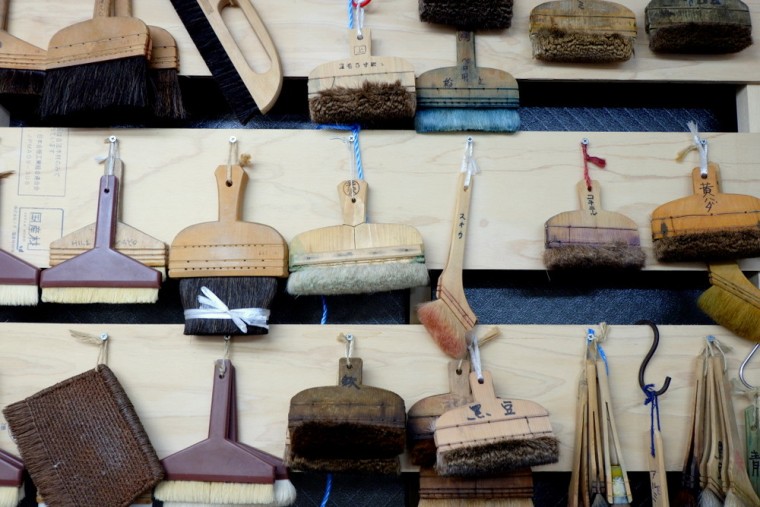 After spending a couple of hours at the festival, I took the train over to Omotesando and unexpectedly had a bit of culture shock! I had just spent an afternoon amongst kimonos and norens and fabrics… and then suddenly here I was rushing past a giant Apple store, people coming in and out of designer shops on a road packed with at least a thousand people. That’s the extraordinary thing about Tokyo. It has the ability to catch you off guard at any moment.

If you’re in Tokyo next February, I highly recommend popping over to Nakai/Ochiai. The website is in Japanese, but if you’re interested to know more, check it out >> Some no Komichi

25 thoughts on “Some No Komichi: Tokyo’s Colourful Festival”