From the air, the first thing I noticed as we glided over the sea, past the coastline and descended towards the runway, was the vast forest that carpeted the land below. There were virtually no other buildings around the tiny Kushiro Airport. We stepped off the plane, and filled our lungs with Hokkaido’s fresh summer air. It felt so good to have left Tokyo’s heat and humidity behind, and I couldn’t wait to get out and go into the wild!

From the airport, we headed inland to the Akan-Mashu National Park. The Akan-Mashu region in eastern Hokkaido is known for its active volcanoes, huge caldera lakes and vast forests, as well as being one of the homes of Japan’s indigenous people, the Ainu. Unlike other national parks around the world, people have lived within the park borders for centuries. It’s not a place where you leave your car at a carpark and explore on foot, but there are towns, hot springs and even a train line in parts of the park. Having said that, a lot of the park’s 90,000+ hectares is protected forestland that is off limits to the public.

Seeing the Bright Side

My time in Hokkaido was actually split into two trips a couple of weeks apart. I’d only ever been to western Hokkaido before, and only in the winter when the entire landscape is white. I was excited to see what the land looked like underneath all of that snow. But, things didn’t quite work out exactly as planned.

The first trip was riddled with disasters. Literally. We spent the first few days re-scheduling everything around a typhoon that was bringing strong winds, rain and taking down a lot of trees. As though Mother Nature felt like a typhoon wasn’t enough, a couple of nights later, a Mag 6.7 earthquake rumbled the earth, causing major landslides in a region further south and taking out the power on the entire island. The weather on the day following the quake was glorious—a beautiful, warm sunny day—but with no electricity, running water or mobile reception, and with schools, businesses and shops closed, everyone had to turn on survival mode.

Strangely, in the midst of this crisis, I came to understand why people love to live in Hokkaido. I couldn’t help but smile as we drove through the region and saw people camping along the lake, canoeing out on the water, fishing in the rivers, and riding their bikes down forest trails. The funniest thing was seeing golf course parking lots absolutely packed. I don’t blame them! It was perfect golfing weather and if you didn’t need to be at work, then why not?! So despite a lot of our plans having gone out the window, I left Hokkaido feeling slightly envious of the locals with this national park at their doorstep.

Thankfully, the weather forecast for the second trip a couple of weeks later was sunshine, sunshine and more sunshine! We were blessed with blue skies and a cool breeze basically the whole time. I finally got to see the landscape at its best and I was completely awe-struck at the beauty, the wildlife and the fascinating natural environment. It was a side of Japan I’d never encountered.

The national park is roughly divided into a western and eastern region. One of the highlights of the west side is Lake Akan, home to an incredibly diverse natural environment. This lake was formed after eruptions from a volcano, Mt. Oakan, in ancient times. In the late 1800s, a very unusual type of algae was discovered on the lake bed. Named “marimo”, the algae grow into spheres up to 30cm wide, the largest of its species in the world. They start off as threads, and grow over several years, getting nutrients from onsen water that seeps into the lake as well as by photosynthesis. The gentle waves of the lake help to rotate the marimo to make sure they grow into the perfect ball.

The shore of the lake is also dotted with these strange grey mud pools called bokke. In fact, they are made of boiling hot volcanic liquid that bubbles continuously from fumaroles, looking something like a hot pot simmering away. In winter, these mud pools are the only place where snow doesn’t accumulate, so wild animals come for the warmth and to find insects to eat. It’s like nature helping nature! 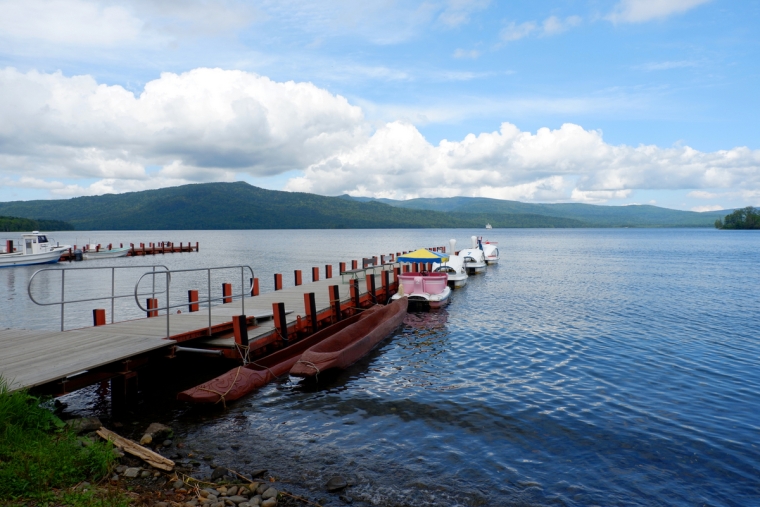 Hiking along the Akan River 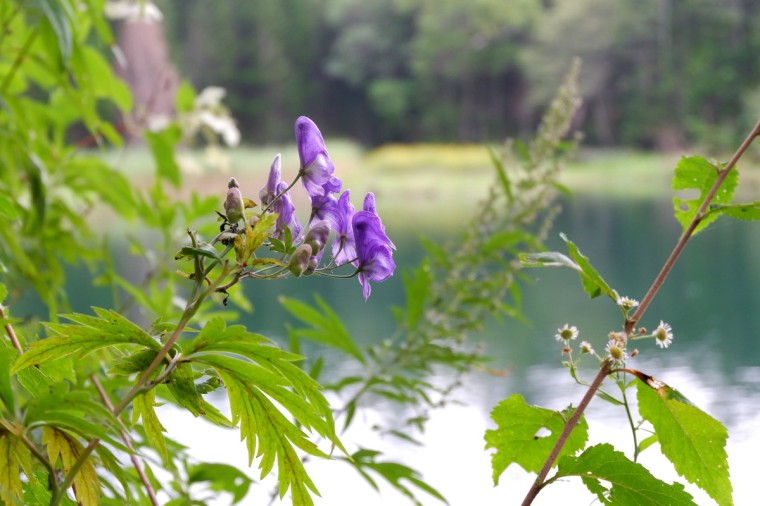 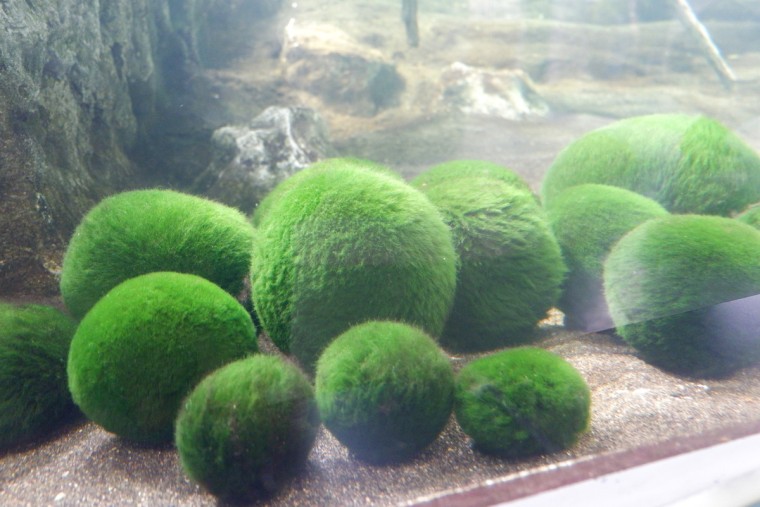 Marimo in an observation tank 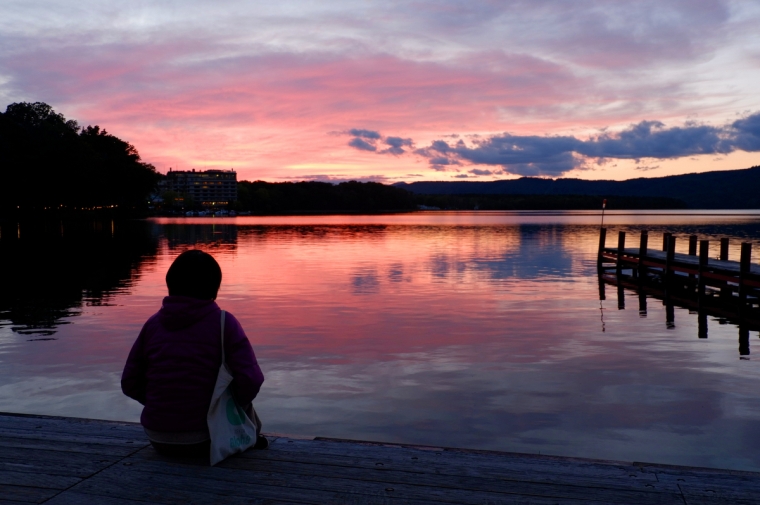 Lake Akan is also one of the homes of the Ainu people. The Ainu lived in various villages around Hokkaido, and had their own language, belief system and lifestyle, separate from the Japanese. Unfortunately, a lot of their culture has been lost over the years and there are likely no full-blooded Ainu today, but thanks to a few places like the Akan Ainu Kotan, we’re able to learn a little about who these people were. What stands out the most about the Ainu was their connection with nature. They lived peacefully as hunters and gatherers, fishing in rivers and using plants to make clothes. They believed that all living things were spirits. They worshipped animals as though they’d been sent from the spirit world to help them survive. Owls were considered protectors of the villages and bears were thought to be gods of the mountain. 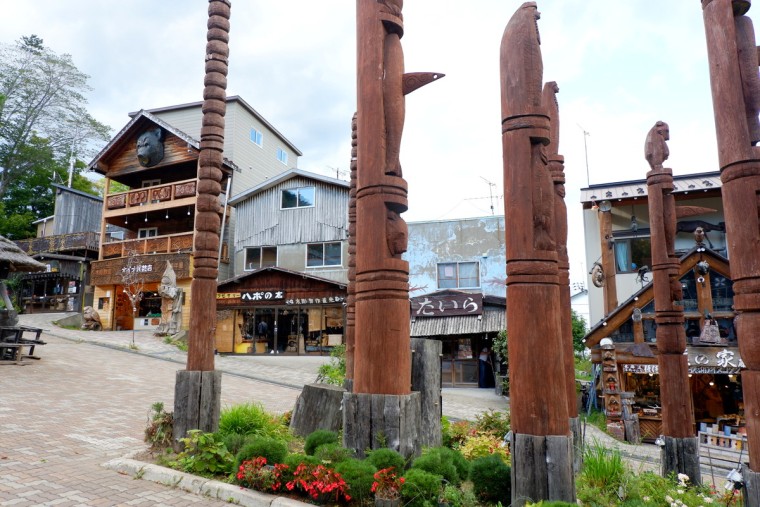 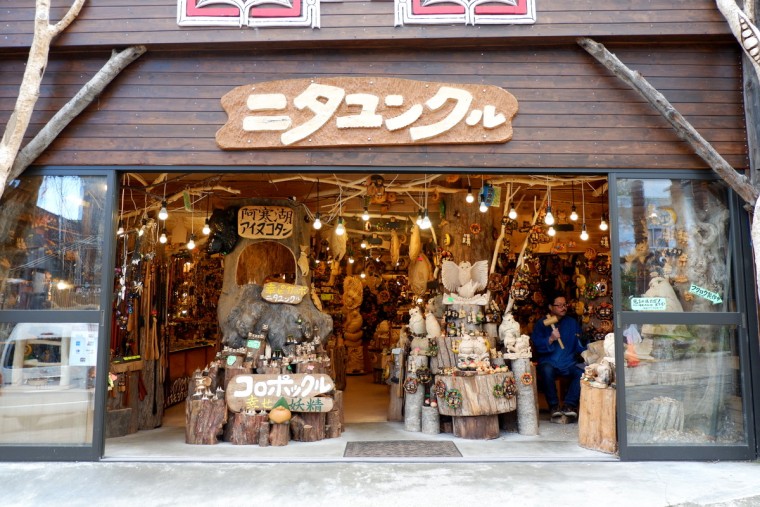 South from Akan is another lake, Onneto, that was formed when eruptions from a volcano dammed a river. On our first trip, the lake was unfortunately shrouded in rain clouds, and there was no sign of the cobalt blue waters it is famous for. Determined, we came back here during our second trip and it quickly became one of the highlights of the whole region. With the blue skies, green forest just starting to show signs of autumn, and the two volcanoes in the background (Mt. Meakan and Mt. Akanfuji), the reflection on the lake was breathtaking. It’s prohibited to go in the lake, but it would have been the perfect place to canoe! Not far from the lake is another very intriguing place called Yunotaki, a 30m-high hot waterfall. The water running down the mossy, black rocks is, amazingly, onsen water. About 30 years ago, scientists discovered the waterfall produces manganese, a metallic element. Usually something that’s found in the sea, Yunotaki is apparently the only place on land where this geological phenomenon occurs! 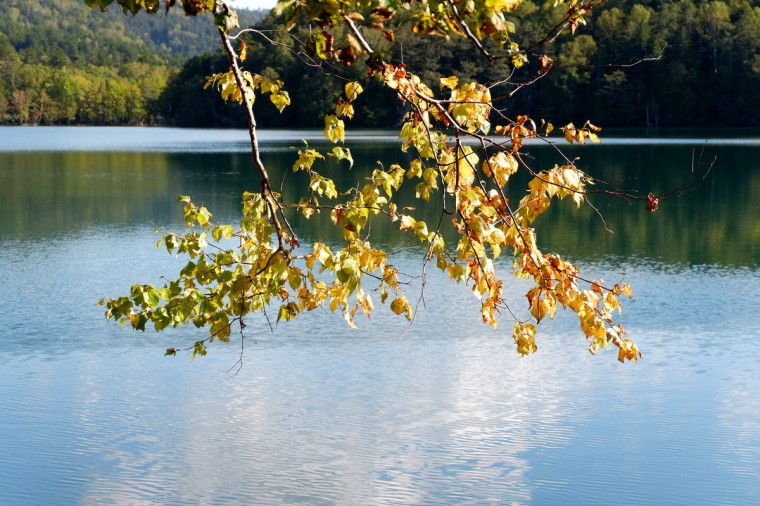 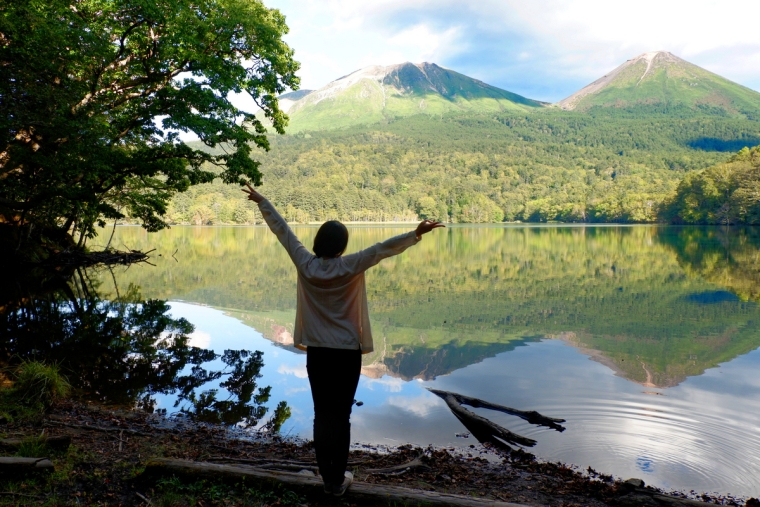 The eastern region of the national park wraps around two huge calderas. Lake Kussharo is the largest of all the lakes in the park. The eastern shore is dotted with rotenburo (open-air hot springs) anyone can use for free. And there’s a rare hot sand beach where people can dig their own onsen! Lake Mashu sits in the Mashu Caldera. It’s surrounded by steep walls and is only visible on the rim of the caldera. Because of the topography of the land, both of these lakes are subject to a natural phenomenon called unkai (a sea of clouds). In the warmer months, just after sunrise, a vast layer of clouds get trapped in the calderas. From the observation decks on the rim of the caldera, you can look down at this ocean of clouds. Conditions have to be perfect for it to form fully – unfortunately, there wasn’t enough hot air to keep the clouds low when I went, but we got a general idea of how it would be. Definitely worth waking up at 4am for! 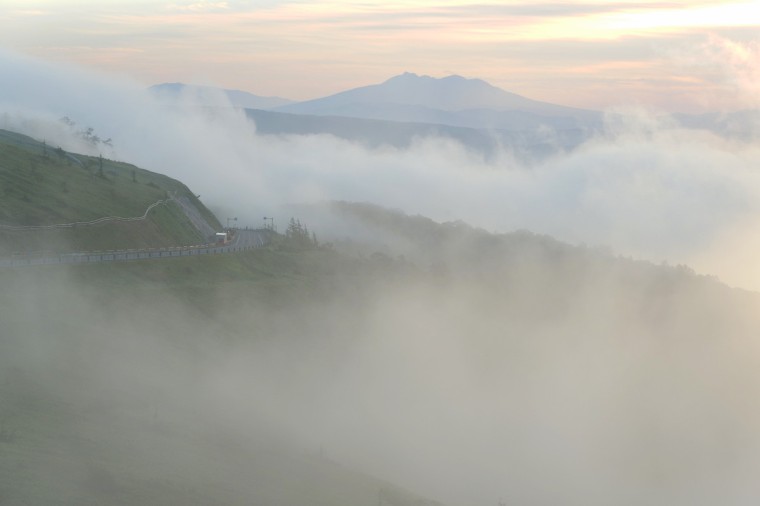 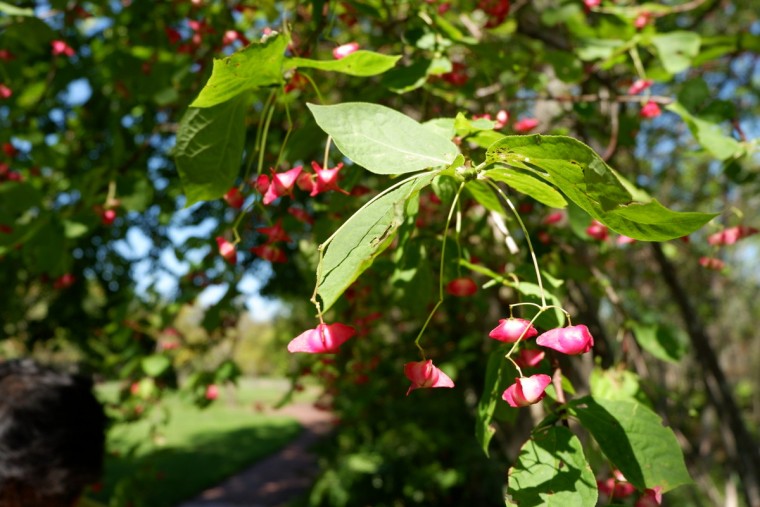 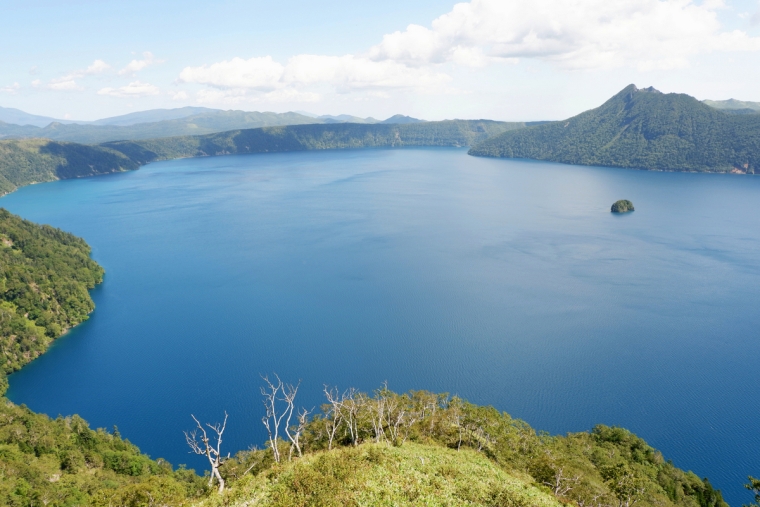 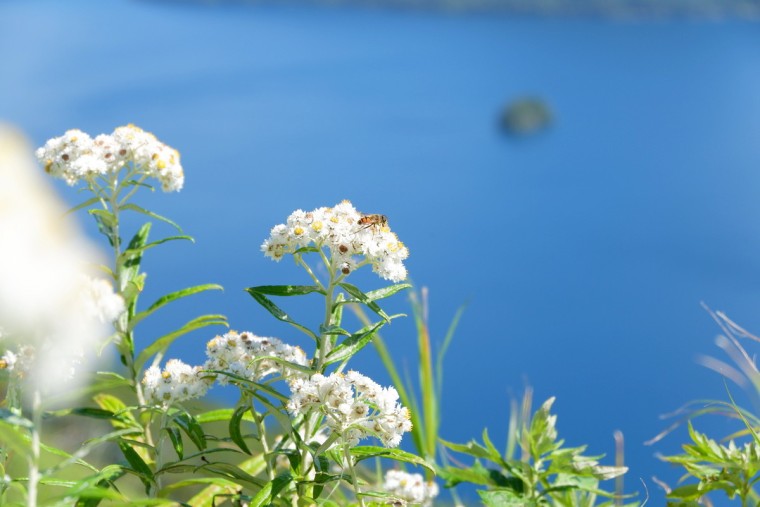 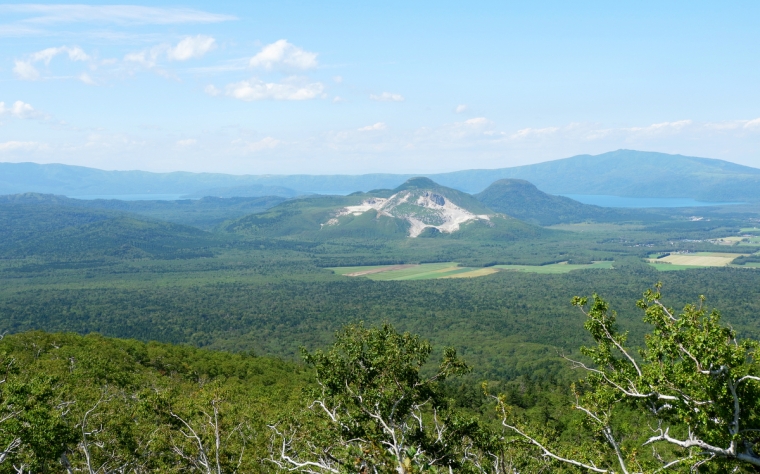 In between the two lakes is the active volcano, Mt. Io. In the past, it was used by the Ainu people to make dyes and kindling. Then in the 1800s, it was made into a sulphur mine which was very successful and brought a lot of money to the area. Today, people can walk to the base of the volcano and see the fascinating sulphur mounds up close. The bright yellow colour among the grey almost looks fake! Around the foothills are a few walking tracks. This was another highlight for me. The ground around the volcano is extremely acidic, so only desert-like plants can grow. But the further away you go, you notice different plants growing, until you reach a lush, mossy forest. I had so much fun mushroom hunting! 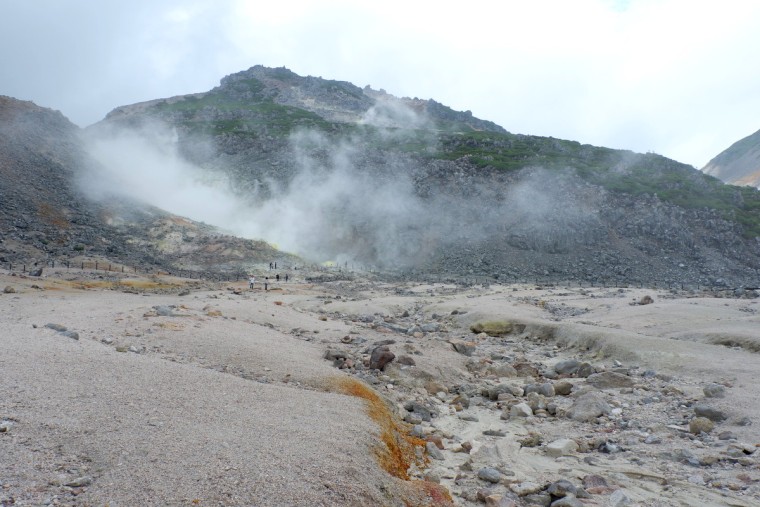 Tiny people walking towards the steam 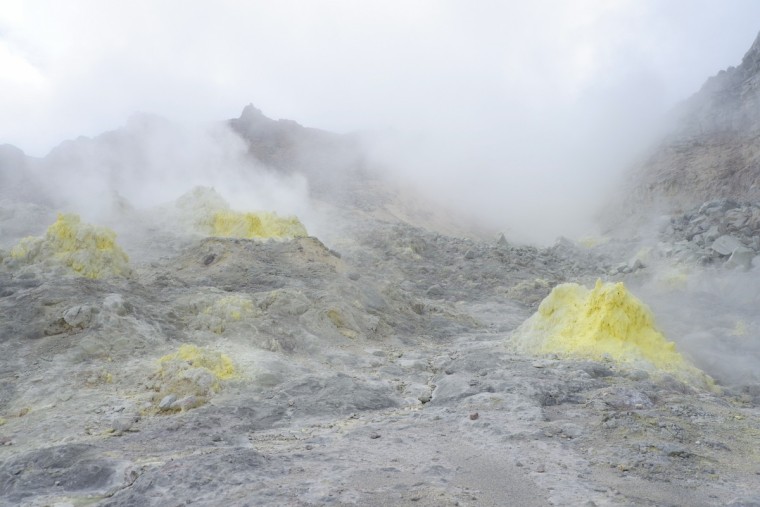 I was blown away by all of the different places in the Akan-Mashu National Park. From lakes to ancient forests to volcanoes, there’s so much to see and experience.

Have you ever been to a national park? What was it like?

25 thoughts on “Into the Wild: Akan-Mashu National Park”