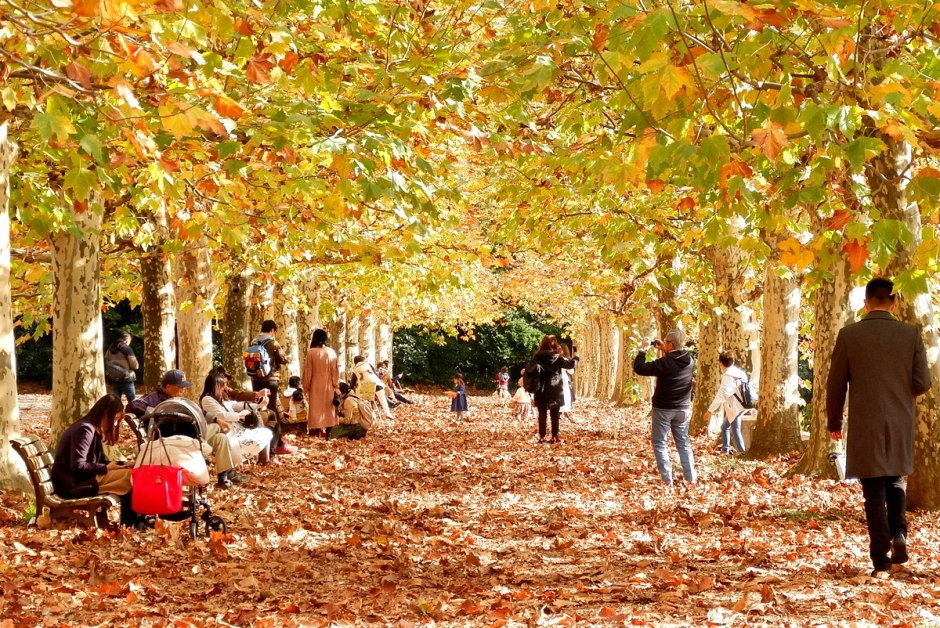 The autumn hues have finally hit central Tokyo! This year the warmth has lingered longer than usual. I remember the first cold snap happening at the end of October last year, but we’re already in the third week of November and it’s only now beginning to get chilly. On the plus side, we’ve had lots of opportunities to soak up the colours without having to take out our winter wardrobe.

Autumn is my favourite time in Japan. I could never get sick of the crisp temperature, autumn light and the rainbow of colours that wash over the trees. One of the best things to do in Tokyo is just get off at a station and walk around the neighbourhood. Recently, I did just that. I started at Yoyogi Station, and headed for the Sendagaya entrance to Shinjuku Gyoen. After playing in the carpet of leaves, my walk continued to Meiji Jingu Gaien, then onto Akasaka Hikawa Shrine, before finishing at Akasaka Station. All up, it was roughly 5km.

Although the momiji trees don’t reach their peak colour till early December, the sycamore avenues at Shinjuku Gyoen look pretty amazing throughout November. Even on weekdays it attracts a decent crowd. I love seeing so many different kinds of people all here to enjoy the same thing. There are plenty of tourists, lots of couples, groups of friends, people reading books, people painting, and many adorable kids. Japanese mothers love to dress their bubs up for mini photoshoots and it is so precious to see them having the time of their lives with the beautiful leaves. On this day, the midday sun kept going behind the clouds, but when it was out, it illuminated the whole forest in the most magical way. I half expected fairies to come fluttering out!

From Shinjuku Gyoen, Meiji Jingu Gaien is about 15min on foot. Not to be confused with Meiji Jingu Shrine, this is an area with many baseball fields and sporting stadiums, including the new main Olympic stadium. I’ve seen it a couple of times over the past year and it’s been interesting to see the progress. But… is it just me or is the design slightly underwhelming?! The initial futuristic design had to be scrapped because of the enormous building costs. Apparently, the new version will have more a ‘natural’ look with greenery hanging down from each level.

The highlight of Meiji Jingu Gaien in autumn is the breathtaking Jingu Gaien ginkgo festival. I make a point to come here every November because… well it’s just too beautiful to miss! It’s one of the most popular autumn spots in Tokyo and unfortunately bus loads of tourists come by. So, it’s better to go early in the morning if possible. From mid to late November, the two avenues of ginkgo trees gradually change from green to yellow. I love when it’s halfway through the transformation as the mix of the two colours make the shape of each tree more distinct.

From the ginkgo avenues, it is about 25 minutes to Akasaka Hikawa Shrine. The first time I was here was when I accompanied a friend’s niece during her adorable 753 ceremony. Akasaka Hikawa Shrine is one of the oldest shrines in Tokyo, having been built in 1730 and surviving all of the wars and natural disasters. The current building replaced a former shrine that had existed since the year 951. So in total, it’s been a sacred site for over 1,000 years! One of the things I love most about this shrine is its location. It might be only a few streets away from downtown Roppongi, but it’s tucked away in a quiet corner, surrounded by a forest of ginkgo trees—the oldest of which is a remarkable 400 years old. It was the perfect place to end my autumn walk!

Have you ever experienced autumn in Tokyo or Japan?

24 thoughts on “A Beautiful Autumn Walk Through Tokyo”