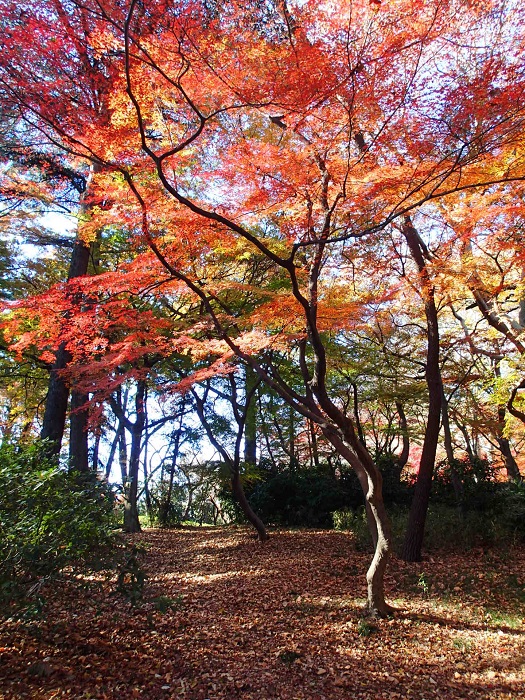 So I realise it’s no longer autumn, and I realise I’ve already posted many autumn foliage photos… I promise this is the last one! I visited Shinjuku Gyoen as part of my Autumn Mission just before I left on my Australia holiday in December, and I’ve been meaning to do this wrap-up post since. Better late than never!

I’d been told it was beautiful at Shinjuku park in the autumn, but since I’d gone so late in the season (it was already winter), I wasn’t expecting a lot. I was more than pleasantly surprised. In fact, I was quite blown away! The fiery reds, oranges and yellows contrasted with the evergreens, and sparkled in the morning sunshine. The fallen leaves swept across the path, rustling and dancing in the wind. Overhead, the tallest trees branched their arms together as if protecting the ground below. The forest was alive! And to top it off, there were only a few others basking in this beautiful, natural show… no crowds, yay!

My self-assigned mission was to see as many autumn-foliage spots as possible in and around Tokyo. I definitely tried as hard as I could, and made the most of weekends and holidays. But, there just wasn’t enough time to see everything! Nevertheless, after spending my first autumn in Tokyo, I can say that it is such a beautiful time to be in the city. I’m not sure it’s as breathtaking as the cherry blossoms in spring, nor autumn in Kyoto, but compared to my hometown in Australia – which is green, green, green all year round – I was like a kid in a candy store!

My autumn adventures of 2013 were:

It was a very chilly morning, already well into December. I thought I had completely missed the chance to see kōyō in Setagaya. Work, life, bad weather (and sometimes just pure laziness) had meant I’d kept putting it off. I’d been looking forward to visiting Gotokuji Temple in particular, ever since I saw its momiji maple trees back in summer. Gotoku-ji is a temple that I had stumbled across during a walk around my neighbourhood, not knowing it was the birthplace of the famous ‘beckoning cat’ or maneki-neko! I didn’t take anymore photos of the cats this time – you can look here at my post about Gotoku-ji, if you’re interested. Either way, I hope you have a look back to compare how different the place looks in autumn compared to summer! At that time, the leaves were as green as grass, but I knew come autumn it would be one hell of a sight!

There’s one thing that the Japanese always know how to get right: gardens. Their meticulous culture means that nothing goes unnoticed and every little detail is considered. Some people might think it’s a bit over the top, but it’s one of the reasons I love Japan! The beautifully trimmed shrubs, the contrasting colours, the symmetry – it’s all the ingredients for a perfect Japanese garden, just like that at Gotoku-ji. 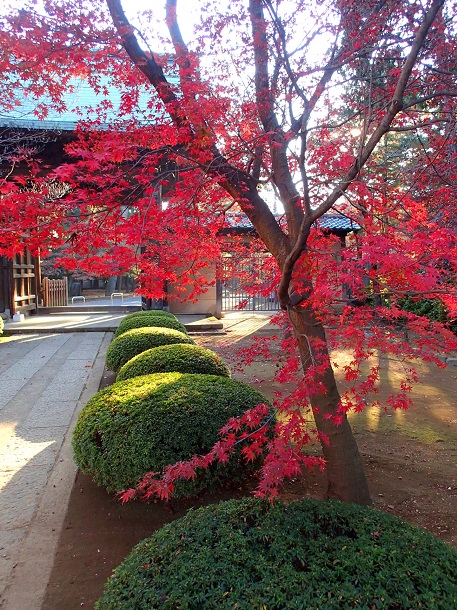 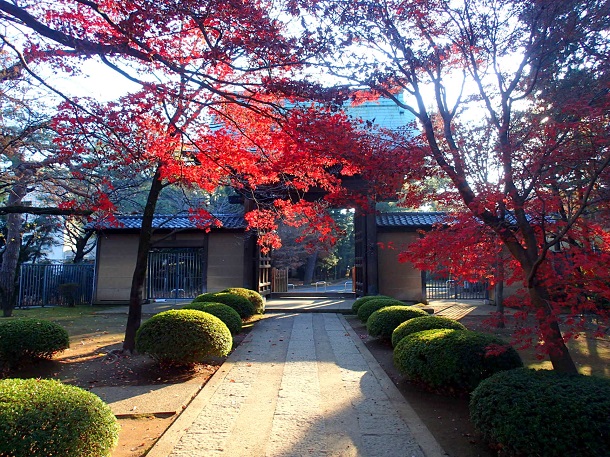 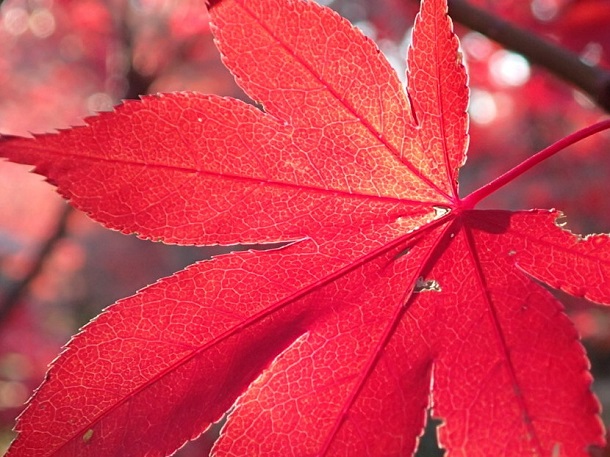 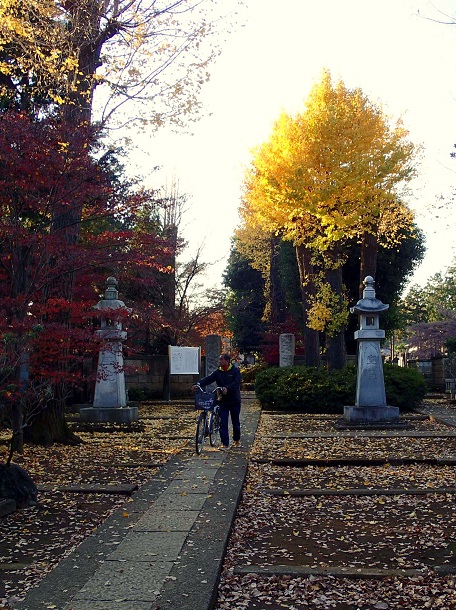 The second temple I visited was Jotoku-in, just around the corner from Gotoku-ji. I stumbled across this one, too! Actually, I had been zooming down the street on my bicycle when to my right I glimpsed a giant yellow tree. Drawn to this lone ginkgo tree, I slammed on the brakes and swerved into the entrance of the temple. The very dramatic discovery was followed by a tranquil exploration of this small temple. I was the only person there so I could take my time taking photos and soaking up the beautiful nature.

Rub the head of Ikkyu-san, a famous anime monk boy, for good luck. :-)

It wouldn’t be Japan if there wasn’t a vending machine in sight. I’m not even joking. 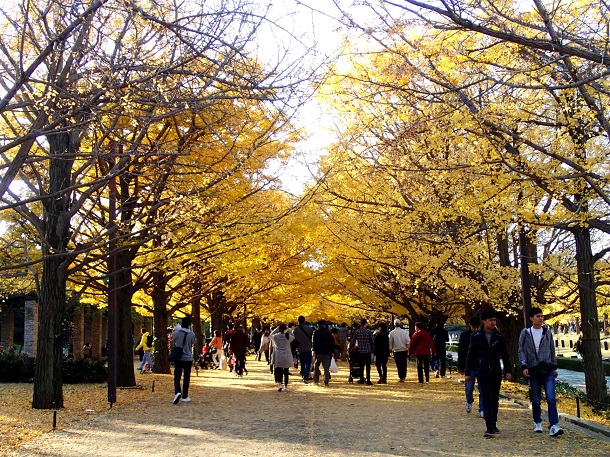 It’s already winter, and I’m still catching up on my autumn posts! Where does the time go?!

A few weeks back, I visited Showa Memorial Park in Tachikawa, western Tokyo. It’s an enormous park that was built to commemorate the Showa Emperor. Each November, the ginkgo trees in the park come alive. The yellow leaves are so radiant that they would brighten even the gloomiest of days. There are two stunning corridors of ginkgos lining both sides of a long rectangular water feature with a beautiful fountain at one end. Yellow leaves carpet the ground, fill the gutters and even blanket the smaller surrounding shrubs. It is pretty spectacular, and I completely understand why the city has created an annual Koyo Matsuri (autumn leaves festival)!

The day I visited the park was the last day of the 2013 festival. Some trees were starting to look a bit bare and the fallen leaves covering the paths definitely looked like they had been trodden on by a million people. Despite that, like everywhere in Tokyo, the park was crowded, very crowded. Standing in one spot for 10 minutes, waiting for a break in the crowd so you can take that perfect shot, is just part of the fun! Patience is a virtue. It also means that you don’t get very far! I barely covered a quarter of the 160 odd hectares. All the more reason to go back again sometime!

Here are some of my snaps of the ginkgo trees, momiji (maples), and a VERY special surprise at the end of the day. 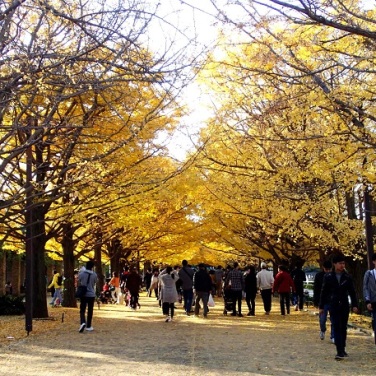 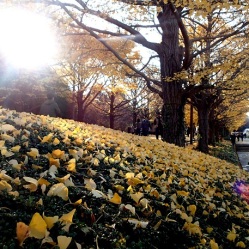 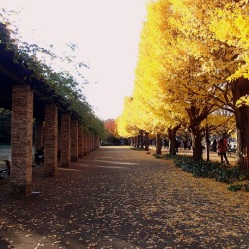 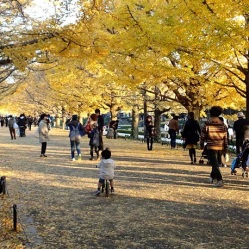 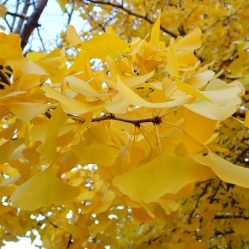 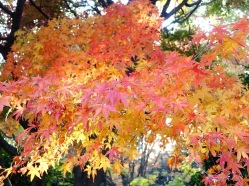 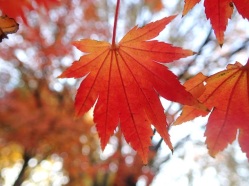 And, drumroll please…. the ever graceful, bold and majestic Mt Fuji made an appearance at sunset. What a treat! There will be more sights like this as winter progresses and the sky becomes less hazy. Can’t wait!!

The leaves have started changing in Tokyo! Finally, I can get on track with my Autumn Mission.

One place that was on my list, and I’m happy to say I’ve now checked off, is the one and only Nikko. This was my second time to the World Heritage town, and it was just as spectacular as I remembered! A couple of friends and I spent the day around the back streets, discovering beautiful colours around every corner. It was so peaceful being away from the crowds. It’s actually kind of unfortunate that most people only go to the well-known sightseeing spots. They’re missing out on so much! At night, we checked out the “light up” at the shrines and temples. I wasn’t sure how good it was going to be, but maybe that’s what made it all the more impressive! The red shinto shrines and momiji leaves against the black night sky were intense and powerful. I literally couldn’t put my camera down! Walking around the small pond in Shoyoen Garden was probably the most memorable part of the night. The reflection of the trees in the water was so picturesque… if only there hadn’t been hundreds of other people there! As usual though, there was no pushing and shoving despite the crowd sometimes having to walk in single file. And even when the line came to a halt because someone wanted to take a photo, people waited patiently. It really is a special country. 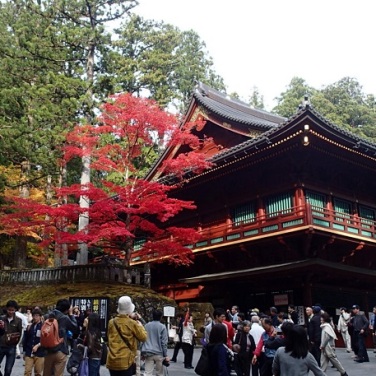 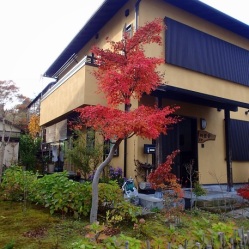 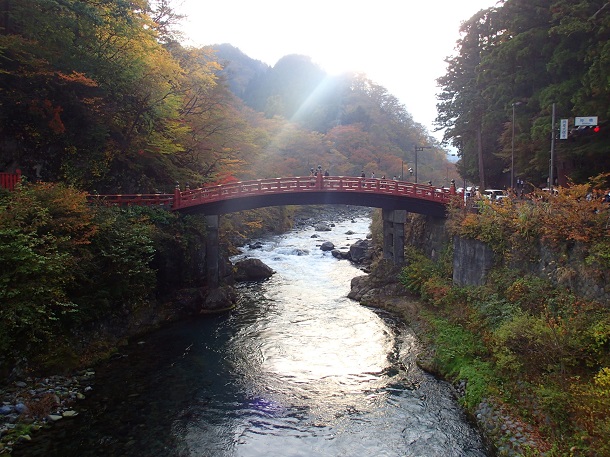 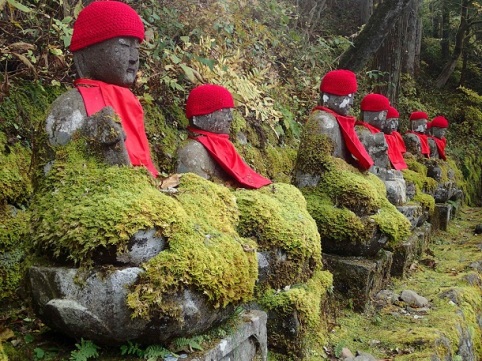 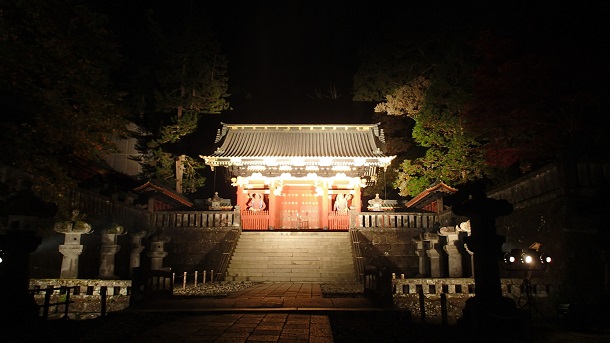 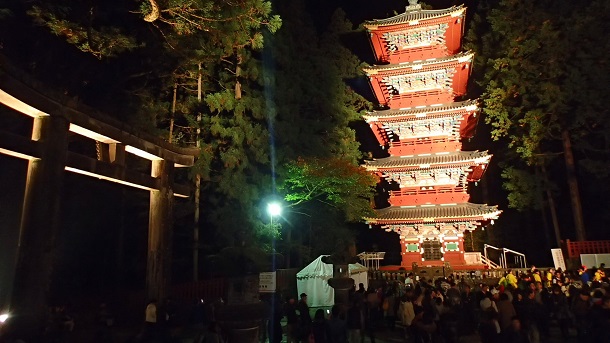 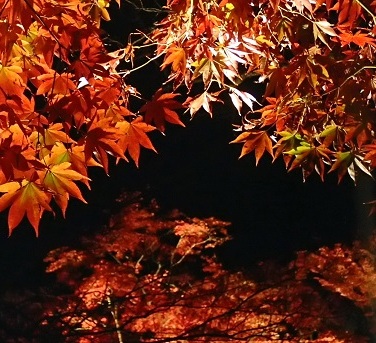 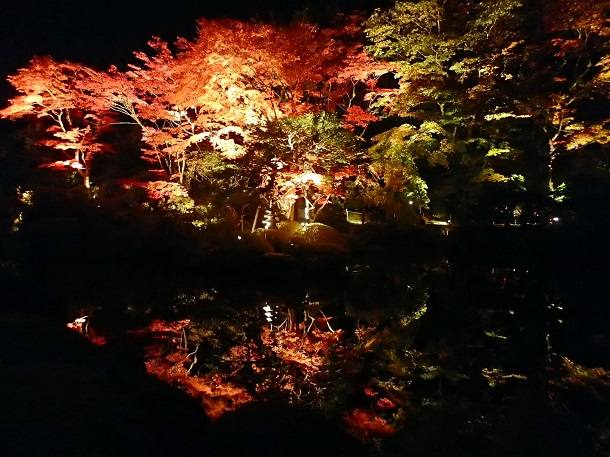 It’s a long weekend and I’m making the most of the extra day off! I’m spending a couple of days sightseeing in the beautiful town of Nikko, a few hours north of Tokyo. I came up to see the autumn leaves, and so did half the country it seems! Traffic has been crazy!! We had wanted to visit a few waterfalls out of town but were told the usual 50 minute bus ride would take about 4 hours!! Boo. So we decided to stay around the World Heritage temples and shrines. It was still a fantastic trip. Nikko never disappoints! Here are a few sneak peak snaps from my iPhone. I’ll share my ‘real camera’ photos later :) 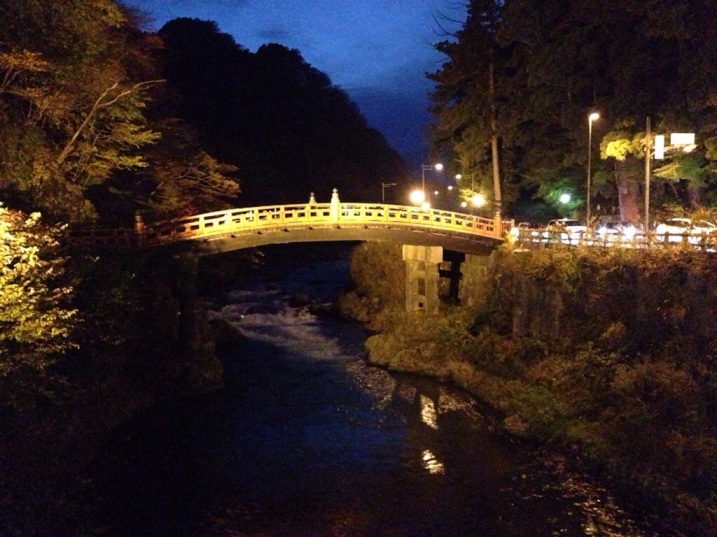 Recently, I’ve felt a new surge of motivation. I don’t know where it’s come from, perhaps the beginning of a new month and a new season. I have decided I’m going to study harder (Japanese language, that is), go to the gym more often, meet more people, and get to know Tokyo a lot better. I’ve signed up for the JLPT (a Japanese test) which will be in December, which means I need to do some serious study! And, I’ve recently discovered ‘meet ups’ in Tokyo, which are organised groups that do various things from play sports to do language exchanges. It’s my new favourite thing!

Actually the time of year really did inspire me for my goal to get to know Tokyo better. I love how the seasons are celebrated in Japan. Unlike Australia where the seasons are basically ‘wet’ and ‘dry’, here, spring has cherry blossoms, summer has fireworks, autumn has maples, winter has snow.

The beautiful, autumn phenomenon of leaves turning red is called kōyō. In my previous post you can see some photos I took in Kyoto last year. Apparently the 2012 season was the best Japan’s had in about 10 years, so I was pretty damn lucky to experience it! Considering I’m now living in Tokyo, I figured it’s the perfect opportunity to see the top kōyō spots in Tokyo and further north over the next 3 months. I also LOVE gardens and nature, so I generally want to visit as many gardens around Tokyo as I can anyway.

An amazingly informative and well-presented website called Walker plus shows the progress of the autumn colours across the country, with regular updates and reports. You can see the leaves are still mostly green all over Japan, but now is the time to start planning!

Walker plus is pretty awesome – I also use it to search for the best cherry blossom spots and summer fireworks festivals. It even has a smart phone app called Walker Touch you can download for free, so you have access to information about events, festivals, concerts, cinemas, etc., anywhere, anytime. You can also bookmark events in the Walker calendar which I think is really convenient. Here are some screen shots, as you can see, very cute and colourful!

According to the Walker plus website, the most popular kōyō spot in Japan is in Nagano prefecture, at a place in the Central Alps called Senjojiki Cirque. I’ve never been, but I’ve seen pictures and man, it looks like the hills are on fire! Take a look at this amateur video:

There are actually hardly any really popular kōyō spots in Tokyo unfortunately. To get to most of the good spots, you need to go hiking up some mountain in the middle of nowhere. But, I have managed to find a few places that should be worth a squiz…

Shinjuku Gyoen is in… yep, Shinjuku. It’s actually my favourite garden in Tokyo because it’s a HUGE park right in the middle of one of the busiest commercial districts in the world, and features a French garden, English garden and Japanese garden. I love all of them!

Inokashira Park is behind the Ghibli Museum in Tokyo’s north-west. It was built in 1917, and has a big pond and a small zoo.

Mount Takao is in Tokyo’s far-west, about 1 hour from Shinjuku. It’s a super popular spot for hiking because of its easy access from the city. I went hiking here a couple of months ago and loved it. There are 8 trails you can choose from and each have their unique features.

I wonder how many of these places I can get to this season! Mission: accepted.