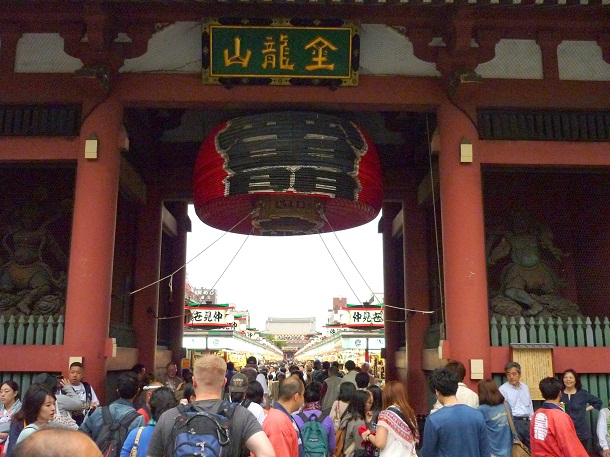 ROUGH and ROWDY! Men and women yelling and chanting; musicians drumming on the taiko; wooden blocks clapping; whistles blowing; the crowd cheering; yakuza showing off their tattoos (in broad daylight!); men with no pants on… yes, that’s right, semi-naked guys. Hundreds of thousands of people took over the streets of downtown Asakusa over the weekend during the Sanja Matsuri, one of the biggest festivals in Tokyo.

This 3-day event has been going on for over 700 years, attracting people from all over the world who come to see mikoshi being jolted up and down, and backwards and forwards, through the narrow backstreets of Sensoji. The mikoshi, or portable shrines, are heaved up on the shoulders of men and women and paraded around from dawn til dusk. Of the 300+ mikoshi, there are 3 “main” ones. These guys weigh about a ton, or 1000 kg, equivalent to a small car… or an elephant! Sitting on four massive beams, they are carried by about 50 people at a time! Every now and then, the leaders force the mikoshi to suddenly change direction or go backwards, and the 30+ people carrying it at the back are caught off guard and start tripping over each other! The look on their faces, especially the women who are frantically trying not to get trampled, says it all… TERROR. The first-timers in the crowd gasp and hold their breath just waiting for the whole thing to topple over… but the veteran onlookers who’ve seen it a dozen times before just shout “危ない!” (watch out!), or  “頑張れ!” (you can do it!). Within a few seconds, the mikoshi regains stability, and the show goes on!

I wasn’t sure what to expect when I arrived at the festival. I’d seen photos online and it looked pretty cool, but so do the million other festivals that happen every year in Japan! Well, I guess that’s the good thing about having low or no expectations, the actual experience can only be better! As soon as I came out of Asakusa Station, BAM! I walked straight into a sea of people. I’ve been to crowded festivals before, like the Gion Matsuri in Kyoto, but for some reason it just felt like there was A LOT of people there. The traffic in the whole area was cut off, so people were free to roam the streets. Hundreds and hundreds of people were crowded around one mikoshi about to enter the shrine gates. Young and old were cheering and getting into it! And despite the amount of people, in typical Japanese style, there was no pushing and shoving. Leaving the main shrine area, it seemed like every corner I turned, there was a mikoshi with a crowd of followers, or some ritual event going on.  Also, it was bizarre and awesome at the same time, to see all the yakuza with their massive tattoos and weird hairstyles ‘getting amongst it’, when usually they are feared by the whole country!

All in all, it was a thoroughly entertaining festival!! 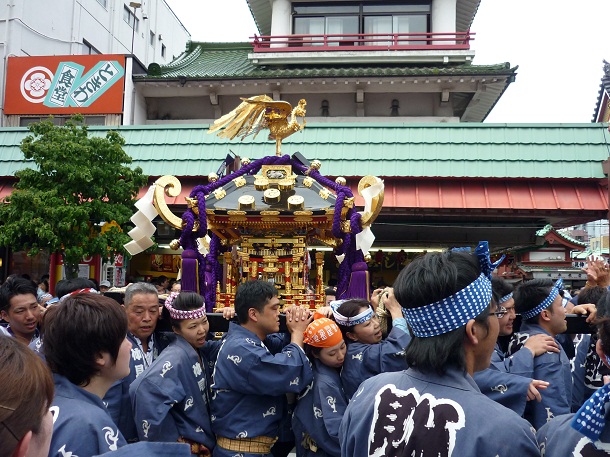 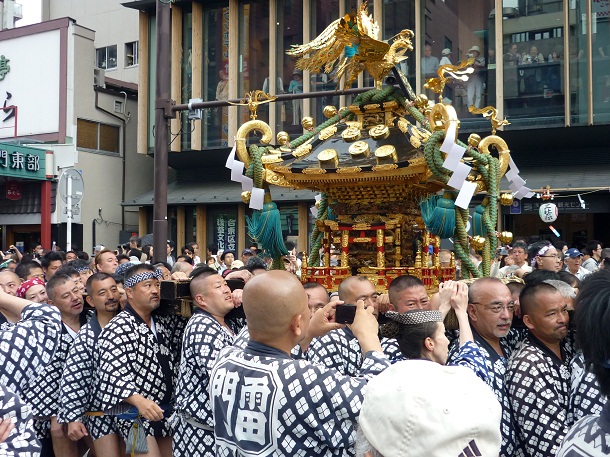 A short video I took: