A couple of friends from Australia came to Tokyo recently. They were so excited for their trip and spent weeks planning where they wanted to eat and what they wanted to see and do. Near the top of their list was visiting an enchanting place in Mitaka by the name of Ghibli Museum! END_OF_DOCUMENT_TOKEN_TO_BE_REPLACED

Lanterns lanterns lanterns! This means only one thing: we are officially on Obon holidays. For one short week in the middle of August, the country takes a breather and lets its hair down. People make the most of this holiday by going back to their hometowns to visit family or even by going on a trip overseas. END_OF_DOCUMENT_TOKEN_TO_BE_REPLACED

Shimokitazawa, or Shimokita for short, is Tokyo’s current “it” place. It’s laid back and unpretentious with a completely different vibe to the hectic streets of Shibuya just a few stops away.

This neighbourhood has an arty, alternative feel to it and is full of second-hand stores, cafés, bars and live houses. During the week, the streets are pretty quiet, but come Friday night, it is inundated with hip 20-somethings most likely from the nearby Tokyo Uni and Meiji Uni campuses. Throughout the weekend, it’s a great place to hang out for young and old!

The streets and laneways in Shimokita twist and turn in all directions, making it so easy to get lost here. But that’s all part of the adventure. Taking a wrong turn could lead you to discover something you would otherwise have never come across. Like a hole-in-the-wall bookstore, or a small temple housing a giant ‘tengu’ mask.

In particular, Shimokita is home to some of the most unique cafés and bars I’ve ever come across.

Up first is Tolo Coffee and Bakery. In one word, I would describe this place as ‘cosy’. Tucked away in the residential part of town, this café is just like a tree house. A giant Japanese cedar tree stands at the entrance and from the second floor of the building, it feels like you’re in amongst its branches! The interior of the café features a lot of natural wood and there’s even a fireplace upstairs. On the ground floor is a bakery called Shirohige’s Cream Puff Shop that makes delicious Totoro-shaped cream puffs. It’s all just super adorable.

In one word, I’d describe this next location as ‘colourful’. Flower Bar Gardena is a store that you’d probably not think twice about when walking past. But unexpectedly, this florist also doubles as a bar! It’s only when you look closely through the window that you realise there’s a shelf of bottles behind the counter. Flowers and alcohol is definitely a unique mix; it seems like such a simple idea, but I’ve never seen anything like it before. 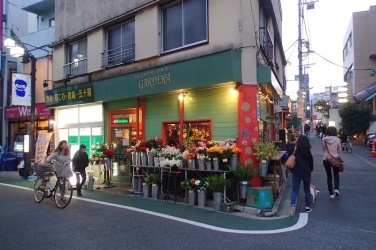 In this next store, I was transported into the ‘wild’. As I sipped on my cup of tea, I could feel the eyes of something burning into the back of my head. The Darwin Room is home to toucans, a zebra, warthog, otter, penguins and a bunch of other stuffed animals. And yes, there were all alive at one point in time. With Charles Darwin as the inspiration, this store is like a fascinating natural history museum where everything is for sale.

Lastly, we are going ‘underground’. Mother’s Ruin is often likened to Indiana Jones or Middle Earth or somewhere medieval. Only distinguishable at street level by a small sign, this secret bar is in the basement of a building. Grabbing onto the dragon-like door knob, it’s hard to know what to expect on the other side. In the dungeon that awaits, the tables and chairs have all been carved beautifully from wood and the walls are covered in old, rugged bricks. But the star attraction: a giant lizard snaking it’s way over the ceiling. It has to be seen to be believed. 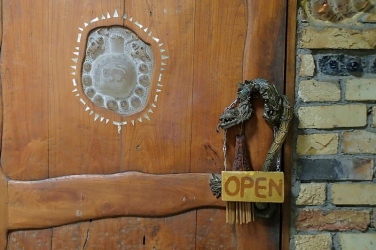 Although I’ve visited Shimokitazawa bunch of times, I still discover something new every time. It’s ever evolving and always so much fun!