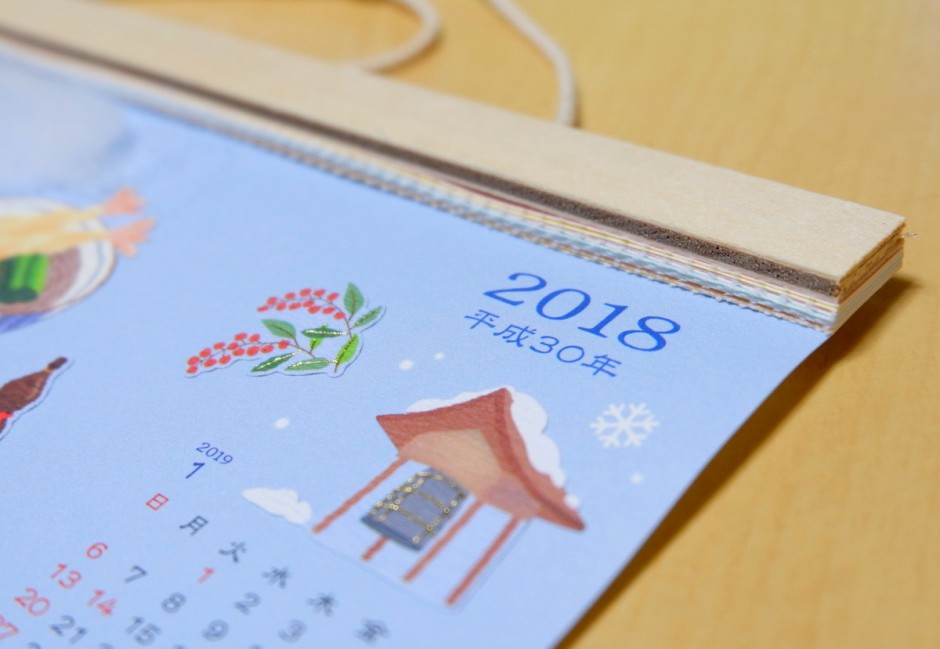 Six years. It’s been almost six years since I moved to Tokyo (and even longer since I moved to Japan). They say time flies when you’re having fun, and they would be right. In Japan, time seems to move so rapidly that it’s like you’re constantly on a treadmill watching the world whizz by. END_OF_DOCUMENT_TOKEN_TO_BE_REPLACED

It’s become customary for many bloggers, myself included, to look back on the year’s highlights with a review post. This was my 5th year writing on Celia in Tokyo, can you believe! And this is my 4th yearly wrap up post. END_OF_DOCUMENT_TOKEN_TO_BE_REPLACED

It’s a bit late but, Happy New Year! How is it already the end of January?

For my 2016 review post, I thought I’d change it up again and sort my fave memories according to the letters of the alphabet. I love doing these yearly wrap up posts as I get to look back at all of the awesome places I got to visit and fun activities I got to take part in, and share them with you in one go. END_OF_DOCUMENT_TOKEN_TO_BE_REPLACED 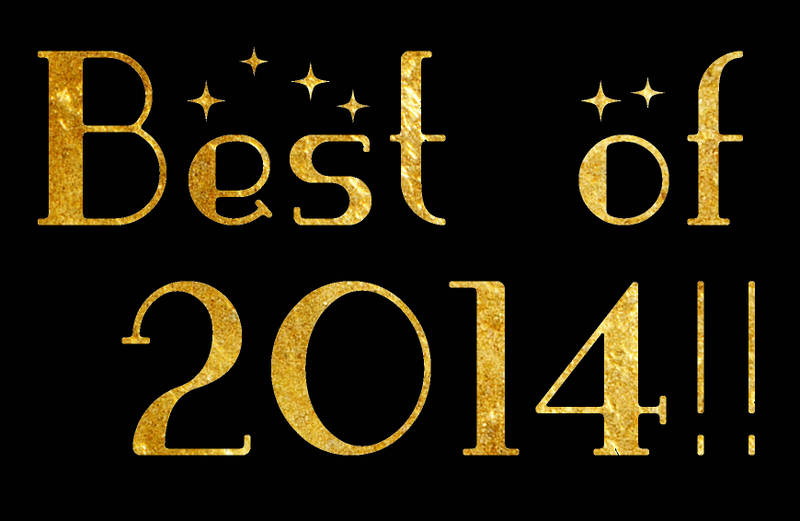 I can’t believe it’s already the final day of 2014! It has been an incredible year, full of adventures, making new friends, and just enjoying life as much as possible! It was my second year living in Tokyo and I’m feeling more and more like a “Tokyoite”. Living on the west side of the city means I’ve gotten to know Shinjuku, Shibuya and Harajuku pretty well. Seeing the famous Shibuya Scramble no longer gives me that rush of excitement – it’s now kind of amusing seeing tourists running out to take their pictures of the masses crossing the intersection! These days, I like to think I’ve got Shinjuku Station down pat. And by that I mean I only sometimes get lost there – in my defence there are more than 200 exits, okay?! And in Harajuku, I’ve discovered some pretty cool little cafes.

2014 was also a year of many many ‘firsts’. I visited the United States for the first time, I finally got my Japanese Drivers Licence and drove for the first time in Japan, I watched a Japanese musical (The Little Mermaid), attended a sports match, and joined in on the Japanese custom of sending nengajo (New Year postcards)!

I also squeezed in a lot of travel within Japan – on holidays, weekends, and days off – so much so that this post is going to be based on these trips. I had a lot on my travel to-do list this year, and it’s an awesome feeling to say that I’ve ticked off most of them. It’s all about determination and organisation!

Without further ado, I give you my Top 10 most memorable trips around Japan this year (in chronological order).

Tokamachi is serious snow country in winter. It lies in the middle of Niigata prefecture, about a 2-hour train ride north of Tokyo. I went to the Snow Festival there with my mum who was visiting back in February. Of all weekends, it just happened to be on one that saw a major blizzard sweep across the country. We were forced to stay longer than we had planned, and all of the snow sculptures were unfortunately covered with fresh snow, but it was still one of the coolest things I’ve seen! I’d definitely go back again next year. 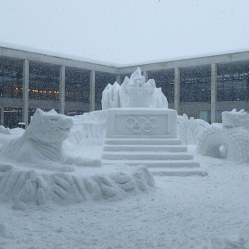 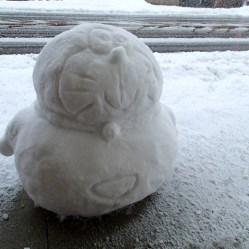 I was super pumped to fly to Hokkaido for the first time. It had been on my bucket list since moving to Japan. This northernmost island of Japan is most famous for its powder snow, so a friend and I went up for a few days of snowboarding. I met some extremely kind people who made the trip all the more special, visited a chocolate factory and a beer factory, ate a lot of fresh seafood and discovered the wonderful Otaru Canal – a beautifully preserved waterway that used to link the warehouses with ships in the bay. 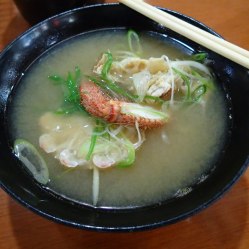 Snow Corridor and Japan Alps (May)

After visiting snowy Hokkaido, I was inspired to see the famous Snow Corridor in Toyama prefecture. This road is along the Tateyama-Kurobe Alpine Route, and is closed for the duration of winter. A snow wall, up to 20 metres high, is created when they clear the road in spring, and is visible from April to June. Beyond the snow wall is Mt Tateyama, a part of the Northern Alps. This pure white landscape was truly spectacular! 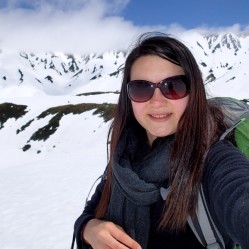 In awe of the Alps

A bit closer to home, Kamakura is a city just an hour or so south of Tokyo. I went to a temple called Meigetsu-in for the first time, after hearing about their beautiful hydrangea stairway. I loved seeing the unusual shapes and colours of the flowers, some which are only found in Kamakura. 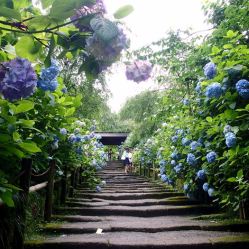 I’d wanted to go to the Fuji Rock Music Festival for ages, and finally made it happen this year. A friend and I went for the final of the 3 days and camped overnight there. It is a massive festival, with 7 main stages plus many smaller ones as well as other attractions. The festival is located at a ski resort in the middle of nowhere in Niigata prefecture. It really is like a rave in the mountains!

By far one of my best memories of 2014 was witnessing an epic sunrise from the summit of Mt Fuji. It was a tough hike. We started at 2,300m at 7pm, getting to the top, 3776m, around 2am. We eventually made it back down around 9am. Luckily we had amazing weather the entire time. I was left with some foot related injuries, but I still think it was one of the best experiences of my life!

Sunrise from the summit 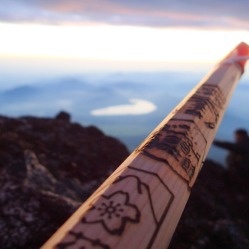 One of 4 castles that are national treasures, Matsumoto Castle is the only black one. It’s nicknamed the Crow because of its colour, and was never actually attacked by enemies which has left it in a remarkable condition. Matsumoto Castle is in Nagano prefecture, about 2.5 hour bus trip from Tokyo. The day I went, there happened to be an event celebrating Matsumoto’s sister city relationship with a town in Switzerland. I got to watch an amazing taiko (drum) performance, as well as hear some genuine yodelling! 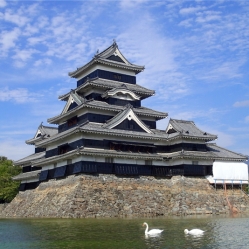 One of my new favourite places in Japan is the town of Karuizawa in Nagano prefecture. It’s known as a summer resort with lots of sporting, shopping and outdoor activities for young and old. I visited the town for the first time in October and fell in love with the natural beauty of the area! I was back a few weeks later to enjoy the mesmerising autumn colours. It’s an easy 2 hour trip from Tokyo, so I will definitely be going back many times in 2015! 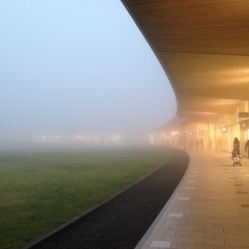 After finally getting my act together to get my Japanese Drivers Licence, some friends and I went on 2 road trips to Ibaraki prefecture, a few hours north-east of Tokyo. I was very excited to be back behind the wheel! On our first trip, we went to the Hitachi Hillside Park to see the bright red kochia shrubs. The second time was an overnight trip, visiting a few autumn leaves spots like Fukurodo Falls. Ibaraki is beautiful in autumn! 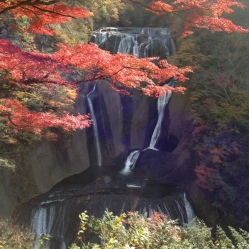 The BEST autumn leaves spot of 2014, in my opinion! After talking with a sweet elderly lady who we met on our way to the Snow Corridor back in May, my friend and I decided we would return to Toyama to visit the Torokko Train. I’m so glad we listened to her advice. The scenic train winds through the Kurobe Gorge, parallel to the emerald-coloured Kurobe River. We timed our trip perfectly and were able to see the colours at their peak. It was an unforgettable experience and I’ll always treasure the memory of being there. 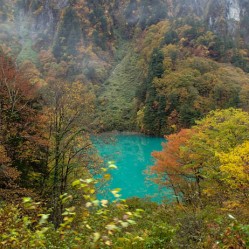 As you can see, most of my trips were to Nagano, Niigata, and Toyama prefectures which are all in the Chubu region of Japan, and no more than 3-4 hours from Tokyo. If you’re planning a trip to Japan in 2015, please consider these places for a day or overnight trip!

As for me, there’s still so much more to discover in Japan. Some places at the top of my 2015 list are Shikoku, Yakushima, Okinawa, Niseko, as well as return to northern Tohoku. Can’t wait!!

Happy New Year to you all! Party safely!